Brathwaite Hails New ‘Beginning’ as Windies up to Sixth in Tests

LONDON, UK – Captain Kraigg Brathwaite said Thursday West Indies were now beginning to write a new chapter of their history after the Caribbean side climbed to sixth in the International Cricket Council Test team rankings – their highest ever ranking in almost a decade. 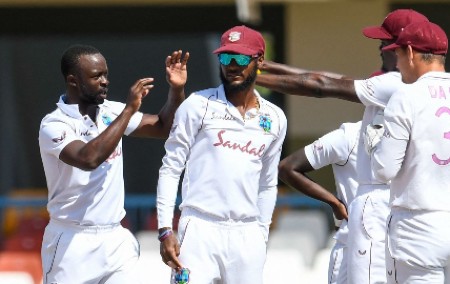 The results come on the backs of a 2-0 whitewash of Bangladesh in Dhaka back in March and a drawn two-Test series against Sri Lanka in the Caribbean last month.

Reacting to the news, the recently appointed Brathwaite said he was “very proud” of the unit but stressed it was important they continued to build on the good work over the last couple of series.

“I’m obviously very proud of the team to have jumped two places up on the Test rankings,” the opener said from England where he is representing Gloucestershire in the County Championship.

“I think this is just the beginning of good things to come. As a group it shows us that we can go up the ladder and it’s just a matter for us to keep working hard and keep that mindset and keep that belief.

“And attitude to doing everything is always crucial and once we keep that up [we will keep progressing].”

The often embattled Caribbean side have languished in the nether regions of the ICC rankings for over a decade, with Test series wins hard to come by in what has underlined perhaps one of the worst periods in the team’s history.

In fact, they have won only eight of their last 31 series inside the last ten years, and have also struggled to beat top tier sides with any consistency.

They suffered a 2-1 defeat away to England last summer and then a 2-0 thumping in New Zealand but under new captain Brathwaite, stunned Bangladesh and avoided defeat to Sri Lanka, resulting in their highest ranking since 2013.

Brathwaite, who replaced top-ranked all-rounder Jason Holder on a permanent basis ahead of the Sri Lanka series, warned the upward movement in the rankings should not be reason for complacency.

“We don’t focus on the big picture but once we continue to do the small things right as a team, along with having that correct attitude, [West Indies will progress] because Test cricket is never an easy game,” the seasoned opener pointed out.

“The sky is the limit. So, it’s very good to see we’ve jumped two places up but I just think it’s the beginning.

“We can’t become complacent and think this is the end – this is now the beginning so as a group we just have to keep working hard, sticking together as a family and I look forward to the future playing for West Indies.”

Meanwhile, India have remained top of the pile on 121 points after gaining a single point, and are narrowly ahead of New Zealand (120) who the face shortly in the World Test Championship final.

England are third on 109 points with Australia one point back in fourth and Pakistan fifth on 94 points.