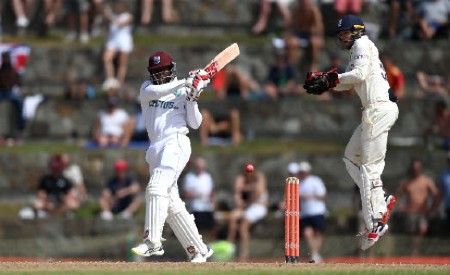 Nkrumah Bonner goes on the attack during his 123 against England on the third day of the opening Test on Thursday. (Photo courtesy CWI Media)The 33-year-old right-hander stroked 123 as the home side battled the entirety of Thursday’s third day at the Vivian Richards Cricket Stadium to reach 373 for nine at the close, in reply to England’s 311.

Bonner received magnificent support from the lower order, adding 73 for the sixth wicket with wicketkeeper Joshua Da Silva (32), 44 for the eighth wicket with Kemar Roach (15) before putting on a further 46 for the ninth with Veerasammy Permaul (26 not out).

All told, West Indies gathered a mere 171 runs from 90 overs but despite the slow pace of scoring, wore England down over the three sessions to leave the tourists deflated at the end.

At the center of that enterprise was the resolute Bonner, the Jamaican striking 12 fours and one six in a marathon innings consuming 355 deliveries and a shade over 9-¼ hours.

For Bonner, the hundred was the second of a fledgling, 10-Test career and also his second at the venue, following his 113 against Sri Lanka last March.

“It means a lot to me. I was looking back at my stats before this game and I realized I hadn’t scored major runs in the Caribbean and today the team needed me and I’m glad I stepped forward,” Bonner said afterwards.

“All of my runs are always gritty. I’m not a free-scoring guy. I am very disciplined. My power is concentration.”

He added: “It’s a good venue, a good pitch to bat on. Obviously we’re in a decent position.

“Tomorrow we really want to bat at least an hour, try to get a hundred [runs] lead and put some pressure on the English batsmen.”

Resuming the morning on 202 for four and still 109 runs adrift of first innings lead, West Indies suffered a major setback in the fourth over when all-rounder Jason Holder wafted indecisively at an out-swinger from all-rounder Ben Stokes (2-42) and nicked off to wicketkeeper Ben Foakes, after adding two runs to his overnight 43.

His dismissal ended a crucial 79-run fifth wicket stand, leaving the home side with a massive void to fill, but Bonner confidently stepped up to spearhead the fightback.

His first ally was Da Silva, the right-hander facing 88 deliveries in two hours and hitting a single four, as West Indies reached lunch without further loss on 271 for five.

Unbeaten on 29 then, Da Silva added only three before perishing in the fifth over following the resumption, pinned lbw on the backfoot by left-arm spinner Jack Leach.

And Alzarri Joseph lasted seven deliveries for his two before pulling seamer Craig Overton (2-85) to backward square where substitute Ollie Pope took a regulation catch in the next over.

On 282 for seven, West Indies appeared set to fold but Bonner refused to budge and Roach and Permaul proved of the same mind, all combining to blunt England’s attack on a flat track.

Bonner reached his half-century in the second over after the first drinks break of the day to be unbeaten on 68 at lunch, and was on 98 at tea with the Caribbean side on 322 for seven.

He brought up his hundred off the second delivery after the interval, with a boundary behind square off Leach and collapsed into Roach’s arms in relief.

Roach was run out four overs later and Bonner’s long vigil finally ended in the third over before the close when he feathered a leg-side catch to Foakes off part-time off-spinner Dan Lawrence.