NORTH SOUND, Antigua,  – Faced with a flat track in their quest for victory on Friday, leading all-rounder Jason Holder has urged West Indies to “give a big effort” and not to think too much about conditions. 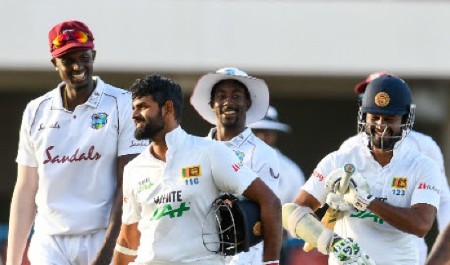 Jason Holder (left) shares a laugh with Sri Lanka’s openers Lahiru Thirimanne (centre) and Dimuth Karunaratne at the close of play Thursday.Admitting the pitch was “not the most conducive for faster bowlers”, Holder said it was now a matter for the home side to become innovative in order to take 10 wickets in the second Test at the Vivian Richards Cricket Stadium and clinch the series.

“It will take a lot of hard yards tomorrow but we’re up for it, everybody is up for it. If we can remain fresh in short bursts, give everything we’ve got in each burst, [we will do well],” Holder said following the penultimate day.

“All the captain can ask of us is a big effort. We’ve just got to give a big effort, keep the pitch out of our minds as much as possible and just give a really big effort.”

The pitch has remained excellent for batting throughout the affair and has shown little sign of any major deterioration.

It was good enough for West Indies to rack up 354 in their first innings after being sent in, and then post 280 for four declared in their second innings on Thursday.

West Indies will be heartened by their first innings bowling effort which saw them roll Sri Lanka over for only 258 to take a 96-run lead, and Holder said bowlers needed to be intelligent again in their approach on the placid pitch.

“It’s not the most conducive for faster bowlers; you’ve got to put something in it,” said the 29-year-old, who made an unbeaten 71 on Thursday to be one of three half-century makers.

“We’ve got to be smart as well. I think field placing tomorrow will be very very crucial – in-and-out fields, playing with the batsmen’s minds a bit and just be patient.

“We’re in a really good position and it will be very, very difficult for them to chase the runs. We’ve got one foot down and it’s a matter for us to be really really smart.

“We’ve really got to come tomorrow morning and give a really big effort. I think tomorrow’s morning session is very crucial. If we can break the back of their batting – we’ve got (Suranga) Lakmal coming at seven so it’s hopeful for us.

“It’s just a matter for us to put the hard yards in early and put them under some pressure.”

Although the pitch has yet to offer any major assistance to the slower bowlers, Holder said off-spinner Rahkeem Cornwall could be a key weapon on the final day.

“Jimmy (Cornwall) has a very important role to play tomorrow. The wicket is obviously worn. We saw a little bit of variable bounce so far in this game so I think that should help us a lot,” Holder pointed out.

“He’s got a bag of tricks too. He’s very familiar with the surface here and hopefully he can extract whatever is left there to get us some wickets tomorrow.”