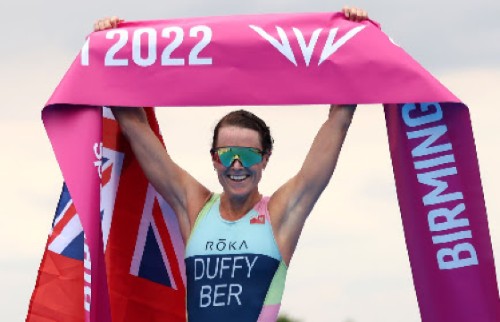 Sodaro did not go home empty-handed, however, as she was named Rookie of the Year.

“It’s great to be here tonight. I’m honored to have been nominated alongside these women and very proud to stand here with this award,” said Duffy, who was chosen by a panel of industry experts.

“Thank you to those who are involved in elevating triathlon stories. I know triathlon changed my life and it has changed Bermuda.

“That is why it is important to have events like this continue to happen and ensure that continues.”

Friday’s accolade in Nice follows a brilliant 2022 in which Duffy cemented her status as one of short-course triathlon’s most dominant forces after clinching a record fourth women’s world title when successfully defending her World Triathlon Championship Series  (WTCS) crown.

That triumph in a title-laden career moved Duffy ahead of Australian Emma Snowsill, who won three world crowns between 2003 and 2006, when the champion was decided by a single race.

The world championship victory in November in Abu Dhabi, where she beat Taylor-Brown into second place, was not Duffy’s only major success, as she also successfully defended her Commonwealth Games title in Birmingham, England – four years after winning it in Australia – and in doing so became the first triathlete to successfully retain a Commonwealth crown.

Despite being her crowning moment, Duffy took the opportunity to heap praise on two of the other nominees, highlighting the standout performances of Gentle in winning the PTO Canadian Open in Edmonton, and also Sodaro, who clinched the Ironman World Championship title in Kona, Hawaii.

“While I’m up here I also want to acknowledge two performances that really inspired me last year,” added Duffy.

“The first was Ashleigh Gentle at PTO Edmonton. It was really moving to watch you cross the line in first and take that win.

“The second was Chelsea Sodaro stealing the show in Kona. I don’t know how but she got me to watch nine hours of triathlon and I was completely gripped the entire time.”

Between that success in England and the crowning glory of her year in the Middle East, last year also saw Duffy take the chance to storm to victory in the WTCS Bermuda event, thrilling the home crowds with yet another dominant display.

Duffy’s year culminated in a visit to Buckingham Palace in London to receive one of the most significant medals among her illustrious career, appointed a Dame in the New Year Honours List in January last year.

Duffy, who won Bermuda’s first Olympic gold medal in Tokyo in 2021, has said she plans to defend her title in Paris next year. She divides her time between Bermuda, her training camp in Boulder, Colorado, and South Africa, her husband Dan Hugo’s homeland.