HAMILTON, Bermuda, May 18, CMC – Danté Leverock, Bermuda’s well-travelled captain, has dropped a bombshell by announcing his retirement from international football at the age of 29. 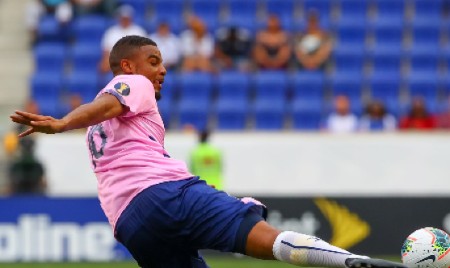 Dante Leverock makes a clearance during the 2019 CONCACAF Gold Cup.His decision – announced on his social media site on Monday night – will come as a major blow to national coach Kyle Lightbourne, who is making last-minute preparations for World Cup CONCACAF Group B qualifying matches against Suriname and the Cayman Islands next month.

Leverock, a towering six-foot, four-inch defender who made his international debut in March 2015 in a friendly against Grenada and went on to make 23 appearances in all for the national team, started in Bermuda’s first two Group B matches in March, both played in Florida.

Bermuda lost 5-1 to Canada and then beat Aruba 5-0, with Leverock scoring the third goal – one of five he netted for the country.

In a short message confirming his decision to step down, Leverock thanked the Bermuda Football Association for giving him the “greatest honor” of leading the country.

“Thank you for all the memories, Bermuda FA, the highs and the lows,” Leverock said.

“Playing on the biggest stage representing and being captain of my country, there’s no bigger honor.

“The future is so bright for Bermuda football. I can’t wait to see the new heights they reach,” added Leverock, but he did not elaborate on his reason for leaving the international stage.

He plays for club side Robin Hood.

Throughout his international career, the center-half, who had stints playing abroad in the United States, England, Ireland, Estonia and Poland, has played a key role for Bermuda.

Among his international highlights, Leverock can look back on the historic occasions of leading the team out in major tournaments, including a first CONCACAF Gold Cup campaign and the Nations League in 2019.

Leverock’s last overseas club stint was in Poland before he returned home last year after contemplating quitting the game because of what he termed racial discrimination during a turbulently brief spell with Polish second-tier club Radomiak Radom.