BIRMINGHAM, England – Barbados Women were brought back down to earth after suffering a heavy nine-wicket thrashing at the hands of powerhouses Australia Women, in their second game of the Commonwealth Games. 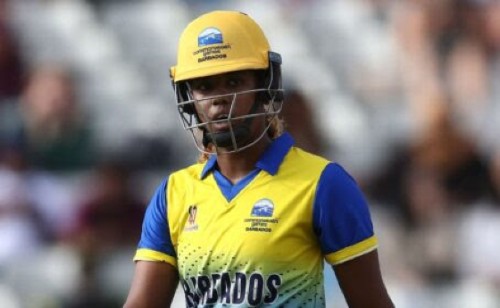 Captain Hayley Matthews walks off after being dismissed on Sunday.Buoyed by their impressive win against Pakistan Women on Friday, Barbados Women quickly had their enthusiasm dimmed when they were bundled out for 64 off their 20 overs here Sunday.

In reply, Australia Women raced to their target inside nine overs with captain Meg Lanning hitting an unbeaten 36 and opener Alyssa Healy scoring 23 not out.

Sent in earlier, Barbados Women never got out of the blocks, their innings destroyed by leg-spinner Alana King who grabbed four for eight and seamer Tahlia McGrath who claimed three for 13.

Captain Hayley Matthews with 18 was the only batsman to make into double figures.

She showed some enterprise in her 13 balls at the crease, striking four fours before she was first out in the fourth over with the score on 20, top-edging a pull at new ball seamer Darcie Brown into the leg side.

There were no signs of the pending collapse when Barbados Women made it to 37 without further loss but once Deandra Dottin (8) missed a paddle sweep at a straight one from King and was lbw in the eighth over, things fell apart.

Left-hander Kycia Knight (9) then helped a long hop from McGrath into long leg’s lap to be third out in the ninth over at 39 for three, as Barbados Women lost their last eight wickets for only 25 runs.

In pursuit of their small target, Australia lost Beth Mooney cheaply for two in the second over with five runs on the board but Lanning lashed five fours and two sixes in adding 63 for the second wicket with Healy, to put her side over the line comfortably.