TAROUBA, Trinidad – Barbados Royals defeated Guyana Amazon Warriors in a rain-hit, low-scoring affair on a difficult wicket at Brian Lara Stadium, to become the first side to book their playoff spot in this year’s Caribbean Premier League. 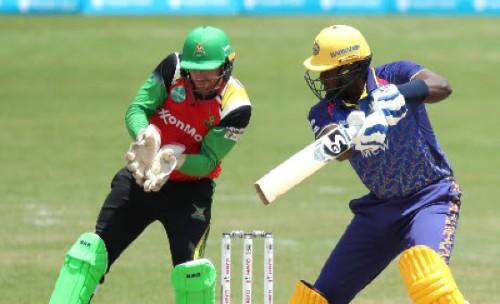 Jason Holder plays through the off side during his unbeaten 40 against Guyana Amazon Warriors. (Photo courtesy Getty/CPL)In a contest reduced to 16 overs after the second of two rain breaks – the first coming before the toss and the second after the 13th over in the Royals innings – the leaders rallied to 107 for six from their quota, thanks largely to all-rounder Jason Holder’s unbeaten 40 from 33 deliveries.

Amazon Warriors, in desperate need of points after entering the game rooted to the bottom of the six-team league, were then held to 81 for nine from their 16 overs, to go under by 29 runs under Duckworth-Lewis-Stern.

They found themselves stifled by left-arm seamers Ramon Simmonds (2-21) and Obed McCoy (2-24), along with off-spinner Rahkeem Cornwall (2-12), and failed to string any partnerships together.

Royals’ win was their seventh in eight games, propelling them to 14 points while Amazon Warriors remained bottom with their fourth defeat in six games and only one victory to their credit.

Sent in, Royals were carried early on by Cornwall who thumped a four and two sixes in 20 from 18 balls but they still crashed to 38 for four in the 10th over after Chandrapaul Hemraj (3-15) made inroads with his part-time left-arm spin.

Holder, who struck a four and three sixes, then patched up the innings first in a 24-run, fifth wicket stand with Azam Khan (8) and then in an unbroken eighth wicket partnership with Mujeeb, who lashed a nine-ball 19 with three fours and a six.

In reply, Amazon Warriors mustered only six runs from the first three overs, leading left-hander Hemraj (4) to hit out and top-edge Cornwall to short fine leg.

Stirling followed in the sixth over, driving his 18th delivery to cover off leg-spinner Hayden Walsh Jr and the promoted Keemo Paul (6) perished in the eighth over at 30 for three, holing out to long off Holder.

When Cornwall returned to bowl Hetmyer at the start of the 10th over, Amazon Warriors were facing a required run rate of nearly 10-½ per over and McCoy and Simmons made a recovery impossible.