ST JOHN’S, Antigua – Roston Chase warmed up for his imminent return to Test cricket with an unbeaten half-century as Barbados Pride made a winning start to their Super50 Cup campaign by brushing aside minnows West Indies Academy by six wickets. 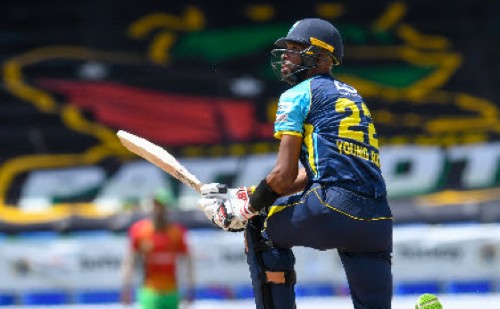 Roston Chase. (file photo)In pursuit of a modest 214 at Coolidge Cricket Ground here Tuesday, Pride overhauled their target at the start of the 45th over, with Chase ending on 86 not out from 81 deliveries which included nine fours and four sixes.

Rookie right-hander Zachary McCaskie added a handsome 71 from 93 deliveries at the top of the order, as Pride coasted to the points.

Keagan Simmons had earlier top-scored with 64 from 81 balls while Kevin Wickham lashed 52 from 57 deliveries but West Indies Academy faltered to be dismissed for 213 at the start of the 47th over.

At 171 for three in the 36th over, the Academy side appeared well poised for a total in excess of 275 but they suffered a collapse and lost their last seven wickets for 42 runs in quick time.

Chase was again at the centre of Pride’s enterprise, removing both Simmons and Wickham to end with three for 31 from his 10 overs while new-ball pacer Ramon Simmonds claimed four for 39 and fellow fast bowler Roshon Primus, three for 27.

Simmonds handed Pride the perfect start when he bowled Kirk McKenzie for four in the sixth over but Simmons patched up the innings in two half-century stands, first posting 77 for the second wicket with Teddy Bishop (45) and then added a further 71 for the third wicket with Wickham.

Simmons counted five fours and Wickham, three fours and two sixes before Chase accounted for both in successive overs. And when Kevlon Anderson was caught and bowled by Chase for two in the 36th over, his dismissal triggered a slide which saw five wickets tumble for 12 runs, before captain Nyeem Young struck 23 at the end.

In reply, Pride were blessed with a sound start as McCaskie put on 68 for the first wicket with Test captain Kraigg Brathwaite (22) to keep the Academy side without early success.

McCaskie, 25, with only a handful of List A matches to his name, struck nine fours and a six to provide the early momentum until Brathwaite needlessly charged down the wicket for a non-existent single and was run out at the non-striker’s end in the 16th over.

Veteran left-handed Jonathan Carter dragged on a drive at fast bowler Joshua James at the end of the 18th to fall without scoring but Chase steadied the run chase, combining with McCaskie in a 44-run, third wicket stand, adding a further 52 for the fourth wicket with captain Shai Hope (14) before posting 43 in an unbroken fifth wicket partnership with Nicholas Kirton (16 not out).