GEORGETOWN, Guyana – Defending champions Barbados put one hand on the Women’s T20 Blaze title when they defeated main rivals Jamaica in the penultimate round here Monday. 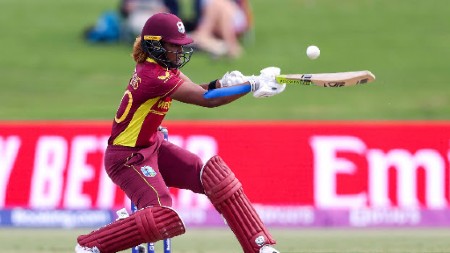 Hayley MatthewsIn one of three matches at the Guyana National Stadium, Barbados posted 129 for four off their 20 overs and then restricted the Jamaicans to 104 for six, to take sole possession of the lead on 16 points.

Both teams entered the contest unbeaten but Barbados used an unbeaten 74 from captain Hayley Matthews to take command of the title race.

The elegant right-hander struck nine fours in a 63-ball knock to underpin the innings, posting 50 for the first wicket with Kycia Knight (14), 26 for the second wicket with Kyshona Knight (10) and 24 for the fourth with Charlene Taitt (8).

Matthews reached her half-century off 47 deliveries in the 15th over with an aerial back foot drive to the cover boundary off off-spinner Corrine Howell.

In reply, Jamaica got 26 from Chedean Nation and 24 from Chinelle Henry but Jamaica failed to find the momentum needed for the run chase.

They lost both openers Natasha McLean (8) and Rashada Williams (0) cheaply to plunge to 17 for two in the fourth over three partnerships then raised Jamaica’s hopes of a recovery.

Nation struck four fours in a 28-ball knock as she added 34 for the third wicket with captain Stafanie Taylor (18) who then put on a further 21 for the fourth wicket with Henry.

When Taylor perished after a 27-ball labor, Henry posted 29 for the fifth wicket with Jerona Walcott (14) but the partnership was a slow one, and Jamaica were left with too much to do at the back end.

Trinidad and Tobago, meanwhile, won their second game when they got the better of Windward Islands in a one-run thriller.

Zaida James struck 28 from 35 balls with three fours but lacked support as no other batsman passed 20.

West Indies batsman Britney Cooper had earlier struck 47 from 41 balls with five fours as T&T reached 88 for eight off their 20 overs.

In the other game, Guyana crushed winless Leewards by 75 runs after gathering 122 for four from their 20 overs, thanks to the West Indies pair of Shemaine Campbelle (36) and Shakibi Gajbabi (32 not out).

Left-arm spinner Kaysia Schultz then grabbed three for 14 to help rout Leewards for 47 in the 15th over.