GEORGETOWN, Guyana – Kyshona Knight struck a half-century as Barbados beat Jamaica by 11 runs under the Duckworth-Lewis-Stern method, to reach the semi-finals of the Women’s Super50 Cup. 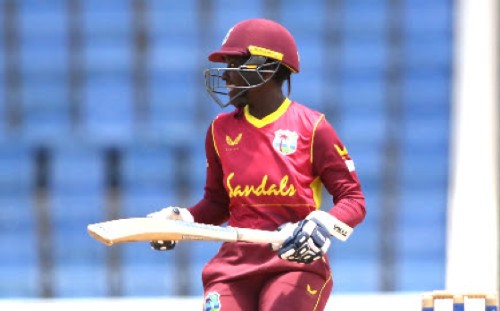 Left-hander Kyshona Knight.In a contest reduced to 32 overs per side on Saturday because of rain at the Guyana National Stadium, Barbados were dismissed for 121 with two balls left in the innings, with Knight top-scoring with 50 off 75 deliveries.

She put on 57 for the first wicket with captain Hayley Matthews (16) to pull the innings around from a poor start when twin sister Kycia perished to the third ball of the day without a run on the board.

Kyshona, who struck half-dozen fours, added a further 22 for the third wicket with Alisa Scantlebury (6) but her dismissal in the 21st over was part of a dramatic slide which saw Barbados lose seven wickets for 25 runs.

In reply, Jamaica were teetering on the brink on 106 for nine in the 26th over when the rains returned to halt the game, with Barbados ahead on DLS.

Opener Rashada Williams top-scored with 29 from 41 deliveries while Henry was unbeaten on 28, but off-spinner Matthews (3-16) and fast bowler Aaliyah Williams (3-22) kept Barbados in control with three wickets hauls.

The best stand of the innings came when Williams, who struck five fours, was involved in a 38-run, third wicket partnership with Taylor (13), pushing Jamaica up to 58 for two in the 13th over.

Once fast bowler Shakera Taylor bowled Taylor in the 13th over, however, the Jamaica innings declined rapidly.

On Sunday, Guyana’s game against Trinidad and Tobago was rained off without a ball bowled.