LONDON, U.K.– Record-breaking midfielder Joe Willock could be on his way out of London to head to the northeast on a permanent basis in a deal worth up to US$30 million, according to British newspaper reports. 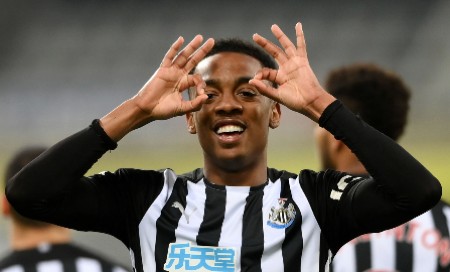 On-loan Newcastle forward, Joe Willock.One report suggested English Premier League club Arsenal may sell 21-year-old Willock, who is of Montserratian descent, to Newcastle United where he has netted seven times in 13 appearances – six of the goals in the last six matches – since joining the Tyneside club on loan in January.

Willock became the youngest player in Premier League history to net six in a row, his latest goal securing a 1-0 win over relegated Sheffield United on Wednesday night. He has a chance to make it seven in a row at Fulham in Newcastle’s final game of the season on Sunday.

After grabbing Wednesday night’s winner, Willock told Newcastle fans: “I want to say thank you for making me feel so welcome and thank you for greeting me with open arms.

“I hope you’re satisfied with what I’ve given for the club so far and hopefully there’s more to continue in the future. I’m not going to promise anything, but the conversation is going to be held.

“To make history at this special club is special for me. I came here on loan to help the team and it’s turned into a brilliant story.”

One report suggested Arsenal are prepared to cash in on Willock this summer to help fund a permanent deal for Norway’s captain Martin Odegaard, who is on loan at the Emirates Stadium from Spanish giants Real Madrid.

Another report suggested Arsenal are open to sealing a £20 million ($28.3 million) deal with Newcastle for Willock, although it said the Gunners could increase the price given the scintillating form the midfielder has been in.

The Frenchman has backed a Newcastle move for Willock, saying: ‘We have to buy more players like Joe Willock, he can be really great for the team and for myself.”