KINGSTON, Jamaica – Jamaica imperiously swept the distance relays but Adaejah Hodge of the British Virgin Islands added a third gold to her tally to claim the Austin Sealy Award for the meet’s Most Outstanding Athlete, and leave an indelible mark on the 49th CARIFTA Games which wrapped up here Easter Monday. 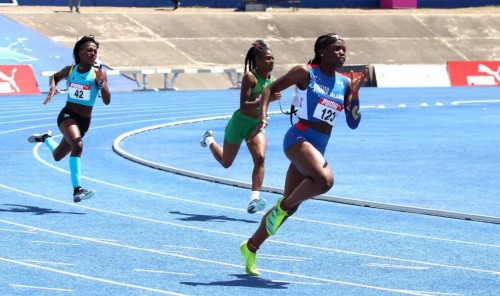 Adaejah Hodge from the BVI in the 200 meters at the 49th CARIFTA Games on Monday.Already with gold in the 100 meters on Saturday and the long jump on Sunday, the 16-year-old Hodge stormed to victory in the Under-17 200 meters in a time of 23.42 seconds, preventing the Jamaicans from also sweeping the half-lap finals.

Running out of lane six, Hodge burst from the blocks to establish an early lead, driving through the curve to enter the stretch ahead of the Jamaican pair of Sabrina Dockery and Theianna Lee Terrelonge.

And the race was over as a contest with 75 meters left, Hodge pulling away spectacularly to cross the line without a serious challenger.

Dockery claimed silver in 24.25 while Terrelonge grabbed bronze in 24.64.

Headwinds slowed the time in the remaining 200 meters finals with the Jamaican trio of Brian Levell, Brianna Lyston and Rickoy Hunter taking the gold medals.

Hunter captured the boys Under-17 event in 22.13, Keo Davis of St Vincent and the Grenadines producing an outstanding performance to get up on the inside for silver in 22.19 while Jamaican Marchino Rose was a disappointing third in 22.26.

Lyston (23.16) added to her sprint relay World record on Sunday with a second gold, blitzing the field from lane six in the girls Under-20 to finish well ahead of Trinidadian Shaniqua Bascombe (24.18) and teammate Kaylia Kelly (24.33).

Bryan Levell then stopped the clock at 21.18 to win the boys equivalent, teammate Sandrey Davidson finishing second in 21.35 and Grenadian Nazzio John taking bronze in 21.70.

Then came the 4×400 meters sweep. The victories in the Under-17 girls and boys races, along with the girls Under-20 were comfortable but Jamaica had to battle in the boys Under-20 race.

With an effort that reminded veteran observers of a 1966 Commonwealth Games World record victory, Trinidad and Tobago kept pace with the strong home team all the way and 400 meters champion Delano Kennedy had to work hard to shrug off the stubborn Soca sprinters on the anchor leg.

The winning time was three minutes, 08.94 seconds, with Trinidad and Tobago taking silver in 3:09.67 and Barbados finishing with bronze in 3:10.71.

“I went out there and did my best even though I didn’t get the time I needed. I’m still grateful for the medal,” said Sahfia Hinds, who ran the first leg for Jamaica’s Under-20 girls and grabbed her second gold following her success on Sunday in the 400m hurdles.

For the third time in the session, Jamaica were prevented from a clean sweep when Curacao’s Matthew Sophia won the boys Under-20 sprint hurdles in 13.74, beating hometown star Demario Prince into second in 13.88.

Bryana Davidson topped the podium in the Under-17 girls in a time of 13.50.

That was the last individual track event and the field events ended with a bang as well, Jayden Hibbert of Jamaica winning the Under-20 triple jump.

He came to the event with the long jump title already in the bag and uncorked a massive second round leap of 17.05 meters but an aiding wind of 2.8 meters per second saw the mark removed from record contention.

The maximum allowable wind assistance is two meters per second.

Barbadian Aren Spencer took silver with a jump of 15.80 while Hibbert’s teammate, Royan Walters, finished in third with 15.59.

Kobe Lawrence added an Under-20 shot put record of 20.02 meters to his discus gold to lead a Jamaica one-two with Christopher Young (19.12), Barbadian Kevon Hinds ending with bronze following a throw of 16.18.

Jamaica’s success on the final day saw them collect an unprecedented total of 97 medals – 47 gold, 32 silver and 18 bronze.