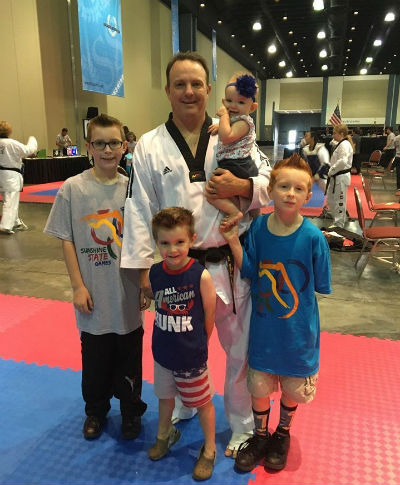 The Games have given fathers and their sons and daughters the opportunity to spend the day together and participate in Florida’s longest-running Olympic-style Sports Festival.

The 2016 Sunshine State Games Palm Beach County Festival fell on Father’s Day weekend.  Here’s how some fathers spent the day with their children enjoying the competition at the Palm Beach County Convention Center.

Master Bill Ferkile and his daughter, Caitlin, spent the weekend as valuable members of the Games administration with more than 200 Taekwondo athletes registered to compete. Aside from his duties registering athletes and compiling results for the weekend, Master Ferkile is a 6th Dan Black Belt and has practiced Taekwondo since he was 13-years-old. He established Ferkile's Taekwondo in 1985 and has been teaching students of all ages the disciplines of traditional Taekwondo ever since.

Fencing Sport Director, Brian Harper, spent the day with his wife Kathryn, their son, Tyler, and daughter Brianna. While Brian spent the weekend overseeing the competition, Tyler served as a referee and coach for Gainesville’s Florida Fencing Academy and Brianna was the armory manager for the event.

Brianna has fenced in the Sunshine State Games, as has Tyler, and has been traveling with Brian to fencing events since she was three years old.

“It’s a great bonding experience,” said Brian Harper of spending the long hours of the Sunshine State Games fencing weekend with his children.

Also at the Palm Beach County Convention Center was Larry, Ivan and Isabella Lingvay from D'Alerta Fencing Academy, in Orlando in Epee events. Larry and Ivan were both in the Men's Open Epee Division with Ivan winning a bronze medal.

“Something like that would only happen if they advanced well into the bracket,” Harper said.

Steve Quillian and his three sons are members of Master James White's TKD in Tampa. On Saturday, Steve, Kaeden (10), Korban (8) and Kolten (4) combined for 18 medals. Steve is spending his Father’s Day in a sparring competition at the Palm Beach County Convention Center. Happy Father's Day to Steve Quillian and best of luck.

Steve Quillian, from Tampa, had a busy Father's Day weekend. Quillian and his three sons, Kaeden, 10, Korban, 8, and Kolten, 4, all were competitors in the 2016 Sunshine State Games Taekwondo Championships in West Palm Beach.

In Saturday's competitions, Quillian and his kids racked up 19 medals after a day of Forms and Sparring matches.

Oldest son, Kaeden, held 7 of the 19 medals to claim with five of them being gold making him the top collector of medals this weekend out of the Quillian boys. Middle son, Korban, collected 5 medals and youngest son, Kaeden, racked up 4.

Steve competed in two forms events, Pair Poomsae and WTF Poomsae, on Saturday winning medals in 3 categories. Steve came out with a win and a gold medal in Sunday's Gyoroogi Sparring match.

"Ruthie will began her first competition at the age of four as well. I had our youngest son in and out of the sport since he was 18 months, but I think this time I'm going stay committed and keep all of my children in it," said Shelley Quillian, Steve's wife, at the time.

Quillian encouraged his son Kaeden to become involved in Taekwondo and after finding interest in it, shortly after, he decided to join himself.

The week before at the 2016 Sunshine State Games Sarasota County Festival, the father and daughter duo of Angel and Angelica Ramirez shot two of the highest scores of the 720 round. Members of the Brevard Archers Club, Angel shot a 677 and Angelica shot a 671. They are back for the 900-round shooting from 40, 50 and 60 yards.

Angelica kept up her progress in the 2017 Sunshine State Games and was named the Female Athlete of the Year.