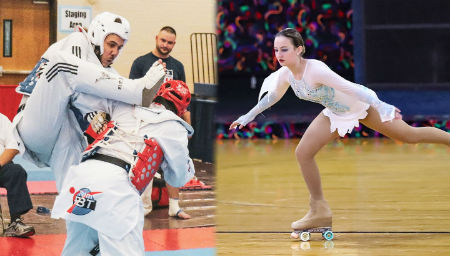 Gabrielle “Elle” Eskew, an Artistic Roller Skater from Chuluota, and Paul McFarquhar, a Taekwondo athlete from Tampa, are the 42nd and 43rd individual athletes to receive the annual honor.

Eskew is a 14-year-old skater for the Skating School of Central Florida, based in Casselberry. Elle was the standout performer at the 2019 Sunshine State Games Artistic Roller Skating Championships at Semoran Skateway, winning seven gold, four silver and a bronze medal.

She advanced to the 2019 Artistic Roller Skating National Championships, in Spokane, Washington, where she earned seven national medals.

Besides her on the rink success, Elle is a great example of an athlete who gives back to her sport, according to SSG Artistic Roller Skating Sport Director David Hankerson. She helps teach the Learn-to-Skate classes to assist beginning skaters. During competitions, she volunteers as a referee or steward and has studied to be a Level 1 Judge.

“Elle had a very successful year as a result of the hard work that she put into her skating with a singular focus on lessons, physical training, and of course, practice,” said Hankerson. “She is a great role-model and the perfect ambassador for the sport of artistic roller skating. Elle will definitely make us proud when she one day represents the USA at the World Championships.”

McFarquhar’s rise through the ranks follows the classic Sunshine State Games journey starting in the sport at three years old. Paul worked their way up from the local, to state championships, and winning an AAU national championship.

He competed as a member of the 2017 AAU National team and is currently pursuing a degree from the University of South Florida. With taekwondo being added to the roster of sports in the 2024 Olympic Games, McFarquhar has a goal of reaching the Games in Paris.

“I’ve known Paul since he was working his way up through the color belts,” said SSG Taekwondo Sport Director, Master James White. “He’s worked his way up to black belt, a state champion and is now a member of the AAU Male Senior National Team.”

A complete list of previous of Sunshine State Games Athlete of the Year recipients can be accessed below: