Great Moments Throughout the History of the Florida Senior Games: Installment 2 of 4

TALLAHASSEE, Fla. – With 29 years and tens of thousands of athletes participating in the annual Florida Senior Games over that time, athletes age 50 and over have turned in some remarkable performances, in this Olympic-style Sports Festival. 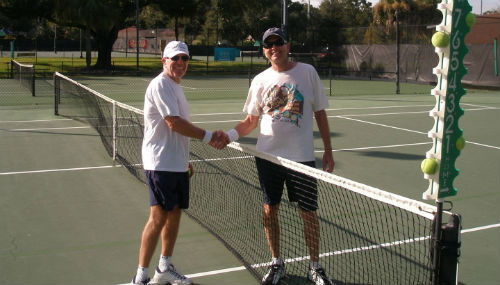 These Great Moments show the dedication and passion the athletes have for, not only their sport, but for a healthy and active lifestyle.  They come from both men and women, from the 50s age groups into the 90s age groups and from athletes who may have been involved in a sport all of their lives or who have picked it up recently.

Whatever it is, they do it, more power to them and keep up the good work!

This is the second installment of more Great Moments of the Florida Senior Games.  Look for more in the coming weeks.

Harmon won the first set, 7-6 (10-6), while Bortner took the second, 7-6 (10-4) as Harmon battled leg cramps, which began late in the second set. In the 10-point tiebreaker, It took three match points for Bortner to score the win, 12-10. Neither player led by more than a point until Bortner earned the final two points.

“I could tell he was hurting at the end of the second set,” said Bortner. “While I felt bad for him, I couldn’t let up because he hung in there and battled.”

“I tried everything I could to shake them off,” said Harmon of the leg cramps. “I was drinking Gatorade and taking salt tablets during the breaks but I couldn’t.”

To advance to the gold medal match, Bortner defeated Thiet Lai, of Orlando in a three-hour semifinals match 6-4, 6-7 (7-4), 1-0 (10-4). Bortner started the day at 8AM with his match against Lai and took an hour break before beginning the championship match at Noon, which ended just before 3PM.

Olympic gold medalist Dot Richardson showed she has more skills than what she displayed on the softball field as she shot a 76 to win the women’s golf gold medal in the 50-54 age group at the 2012 Games in Lakeland.

Richardson’s score was the second lowest score of the field of 45 women’s golfers. She finished two strokes behind Linda Frisch, whose 74 won the 65-69 age group gold medal.  Richardson and Frisch were the only two women to post scores under 80.  Her 76 was also the fourth-best women’s score in the history of the Games.

Richardson was a two-time gold medalist for the U.S. Women’s Softball team, playing shortstop in the 1996 Olympic Games in Atlanta and Sydney 2000 Olympic Games.  At the time of her Florida Senior Games gold medal winning performance, she was living in Clermont where she was the Executive Director and Medical Director of the National Training Center. She returned to the diamond in 2014, on the collegiate level, to become the head coach of the Liberty Flames.

If first impressions are lasting, James Harden, of Davie, is a legend for years to come since he shot the all-time best Florida Senior Games State Championships Archery score in the Compound & Release event, collecting 891 points of a possible 900.

At the 2011 Games, Harden hit 27 of 30 shots inside the gold 10 ring of the target, on each of his three rounds, according to Sport Director Tim Austin. His three rounds were shot from distances of 40, 50 and 60 yards. Of the 90 arrows shot, 81 hit within the inside gold ring, for 10 points, while the nine remaining arrows, hit inside the outer gold ring, for nine points.

On the 48-inch target (four feet in diameter), the full outer gold ring measures 12.2 centimeters (4.8 inches) across. The inner X-ring measures 6.1 centimeters in across (just under 2 ½ inches).

“I’ve only seen two scores higher than that in Senior Games competitions,” said Austin. “Those were both at the National Senior Games.”

Competing in his first Florida Senior Games State Championships, Harden topped the previous all-time high score, an 881, shot by Frank Gandy, of Bartow, in 2006, in the Men’s 70-74 Compound & Release event.

At the 2004 Games, in The Villages, Perkins set the 90-94 age group record with a time of 1:00.03 that still stands 15 years later.  When she competed, it was always her request to the staff escort that when they were 100 yards out from the finish line, she wanted to jog the homestretch of the race.

On the day of her record-setting performance in 2004, her race escort was event operations intern, Heath Tavrides. While waiting for the race to start, race volunteer and resident of The Villages, Virginia Jensen,  jokingly told Arda, "Now we're going to be keeping an eye on you so you don't get lost out there on the course and start any hanky panky with that young man."

With a few race volunteers and co-workers within earshot of the comment, Heath turned about as red as the windbreaker Arda was wearing.

Dean Davis Wins 17 Gold Medals with Games in His Hometown

Using the homefield advantage to his benefit in the 2009 Games in Fort Myers, Dean Davis competed in 17 events in three sports and won 17 medals.  Between swimming, cycling and track and field, Davis earned five gold, eight silver and four bronze medals in the 80-84 age group.

Between 2006 and 2009, with the Games in his Southwest Florida backyard, Davis competed in 48 Florida Senior Games State Championships events, winning 34 medals.  He also earned the 2008 Male Athlete of the Year award.

Whether it be on a bike, in the pool or on the track, Davis brought enthusiasm and encouragement to athletes in all age groups.