Great Moments Throughout the History of the Florida Senior Games

TALLAHASSEE, Fla. – With 29 years and tens of thousands of athletes participating in the annual Florida Senior Games over that time, athletes age 50 and over have turned in some remarkable performances, in this Olympic-style Sports Festival. 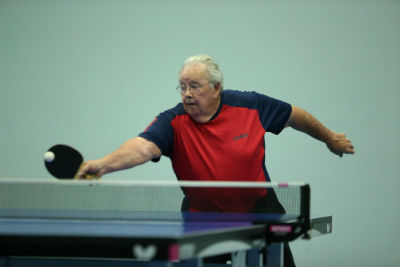 These Great Moments show the dedication and passion the athletes have for, not only their sport, but for a healthy and active lifestyle.  They come from both men and women, from the 50s age groups into the 90s age groups and from athletes who may have been involved in a sport all of their lives or who have picked it up recently.

Whatever it is, they do it, more power to them and keep up the good work!

This is the fourth and final installment of the Great Moments of the Florida Senior Games.

Both men use table tennis and other activities to stay active and healthy.  Shultz moved to Lakeland to take advantage of the Lakeland Table Tennis Club’s weekly activities.

“I now play three times a week instead of the once a week when I lived in Inverness,” Shultz said.

He also plays at times when younger players at practicing at the Simpson Park Community Center in Lakeland to have better competition.

When Shultz won his medal in the 1993 Florida Senior Games in Sarasota, he was playing in the 55-59 age group. He has been a medal winner in six age groups during his 27-year streak and totaled 25 gold medal winning performances, 16 in Men’s Singles, eight in Men’s Doubles and one in Mixed Doubles.

The performance earned her the 2004 Florida Senior Games Female Athlete of the Year Award, which she received at the 2005 Ambassadors for Aging Day Ceremony at the Florida Capitol in Tallahassee.

She averaged a 157 score in three games to win the 90+ singles bowling gold medal with a three-game total of 472.  She won the women's doubles 80-84 age group with Evelyn Gooding, of Sebring, and the 90-94 age group mixed doubles with Carl Laubach, of Palmetto.

She rolled her high score of the weekend competition in women's doubles with a 179 game.

In one of the finest weekends in the history of Florida Senior Games bowling, Lady Lake’s Richard Merrill posted the first 800 series in the history of the Games, rolled only the second perfect game in 19 years, knocked down nearly 3,000 pins and won four gold medals.

After picking up a spare in the fourth frame of the second game, Merrill closed with 20 consecutive strikes. He had a total of 29 strikes and 6 spares in the three games.

“I left the seven pin in the first and fourth frames,” Merrill said of his second-game before the perfect third game. “I threw well on Saturday and it carried over to Sunday. I had a good high access rotation on the ball.”

He finished the weekend winning his fourth gold medal as a member of the Ageless Villagers 60-64 age group team. He contributed a three-game score of 707, to the Ageless Villagers total of 2,873. A former Professional Bowlers Association member, Merrill said he has 4 or 5 perfect games a year and had one the week prior to the 2010 Florida Senior Games. For his 2010 performance, Merrill was named the Games Male Athlete of the Year.

Besides Merrill’s perfect game in 2010, there have been five others who have rolled a 300 in the Florida Senior Games including Jerry Brunette, of Naples, in 2006, Lawrence Draeger, of Pensacola, in 2011,

At the 2004 Florida Senior Games Track and Field competition, held at The Villages High School, Jacksonville’s Michael Brown set a standard that may never be reached again with a javelin throw for the ages.

The former high school teacher and track and field coach established the top javelin throw in the 28-year history of the Florida Senior Games on December 11, 2004, at The Villages High School with a throw of 226 feet.  He repeated the exact same throw at the 2005 National Senior Games, in Pittsburgh, Pa., to set the overall top mark.

“I was helping out measuring on the field that day in The Villages,” said Florida Senior Games Track and Field Sport Director Tony Tussing.  “I remember thinking, ‘Wow, that’s a really long throw.’  You don’t even get throws like that in most collegiate meets.  And this guy is 50 years old.”

No athlete has topped a javelin throw over 200 feet, in either event, since.

Kathy Petrillo learned a valuable lesson during her silver medal ride in the 2015 National Senior Games 40K Cycling Road Race and bounced back the next day to win the 20K Road Race gold medal at the Minnesota State Fair Grounds.

“A couple of riders from a Minnesota team played me,” she said after the 40K Race. “There was no group riding with an attack and sprint at the end.  They sprinted the whole time.  It was a like a 40K sprint.”

Petrillo assumed correctly Donzella and Jansen would try the same thing again in the 20K, which they did, but she was prepared.

“I ran in second place until the end and when the third-place rider would sprint to the front I would follow and not fall behind both of them.  In the final homestretch, I was pushing so hard my bike was bouncing.”