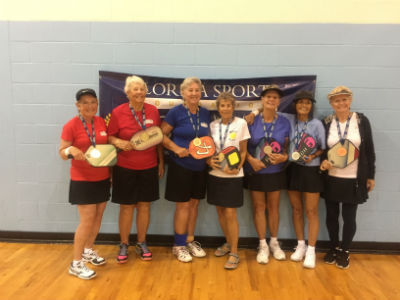 If your guess was they are both members of the West Chester University Athletics Hall of Fame, you would be correct.

Her athletic endeavors span 70 years from high school to Senior Games age group competition.  Brown began as a three-sport competitor at Coatesville High School and served as co-captain of the girl’s basketball team where she earned varsity letters. She also lettered in field hockey and swimming during her high school career.

All of this was taking place in the years before Title IX, when women athletes had little encouragement to pursue their interest in sports. Gail "Gussie" Brown still managed to rise to athletic prominence in an era offering little support at the school and community level.

One of her first competitive triumphs was winning a Marbles tournament, put on by the Parksburgh, Penn., Lion’s Club.

She then played on a girl’s baseball team that was spurned from the All-American Girl’s Baseball League, made known in the film, “A League of Their Own.”  As a 12-year old, she played on weekends with older girls in their late teens and into their 20s.

“My dad took me to games every weekend,” she said. “There was a league in Indiana where I could have played, but I was too young.  I guess I was pretty good. It was an exciting time for me to do something different at that age.”

At then West Chester State Teachers College, she played softball and continued to excel in basketball in the mid-1950s. She served as co-captain of the basketball squad and in 1956 was selected to an all-star team that played in an exhibition contest prior to an NBA game featuring the Philadelphia Warriors (modern-day Golden State Warriors).

Following her collegiate years, Brown began a career coaching a variety of sports including softball, field hockey, basketball, lacrosse and tennis at the high school level. She also taught health and physical education.

“I coached every sport,” Brown said.

When not on the sidelines, Brown was honing her skills on the golf course, a game she started playing at the age of 25.  She was the Delaware State Amateur Champion in 1974 and 1985 and won back-to-back State Senior Championships in 1989 and 1990.

Her Senior Games accolades in Pennsylvania, Florida and on a national level are equally impressive.  Her first medal-winning performance came at the 1995 National Senior Games winning a bronze medal playing golf in the 55-59 age group.  Between 1995 and 2013, Brown turned in eight medal-winning performances, in four age groups, including four gold, a silver and three bronze medals.  She posted scores that still rank in the NSGA Top Ten Performances in 2001, 2003, 2007 and 2011.

“I got started in the Senior Games with a group of women from Philadelphia,” Brown said.  “I’ve played golf, basketball, horseshoes, table tennis, volleyball and now pickleball.”

Brown’s first appearance in the Florida Senior Games came in 2012 when she won the Women’s Golf gold medal in the 75-79 age group and earned two Pickleball gold medals in women’s and mixed doubles.

Beginning in 2013, Brown began representing Florida at the National Senior Games and won a gold medal in the 75-79 age group, mixed doubles event and a silver in women’s doubles.

In the last three National Senior Games, Brown and her current partner Jean Kiker have won two gold and a silver medal to become a formidable pair on the national level.

“We’re good friends and teammates,” Brown said of her doubles partner. “We might be old but we’re still good.”

From Coatesville High School in the 1950s to the Florida Senior Games and National Senior Games in the 2020s, Gail Brown has proven she’s a winner.  Four Halls of Fame, and a Lion’s Club Marbles Championship, will back that up.