A Picture Tells A Thousand Words – The Ultimate Layout 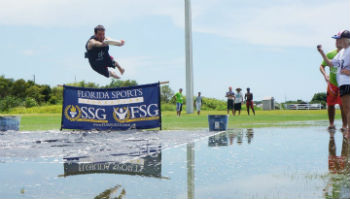 Why not combine the two?

It’s a hot summer day in Florida and athletes have been running up and down the field chasing a disc to earn Sunshine State Games medal.  Some win. Some don’t.

But the fun is just starting.

Ultimate event organizers are laying out the tarps for the “Ultimate Layout,” competition. The ultimate closing event of a Sunshine State Games sport.

The tarps are laid out on the grass and lubricated with dish soap and plenty of water.  The mixture gives the athletes the best opportunity for an impressive slide across the ground after laying out vertically in dramatic fashion to catch a disc thrown by a teammate.

Needless to say, the Ultimate Layout, a fun event created by sport director, Kristen Murphy, in 2007, sent everyone home happy with fond memories and looking forward to future years.

“I thought it would be a fun addition to the end of tournament,” said Murphy. “Since everyone was hot and sweaty by the end, an adult slip n’ slide seemed like something that would be appreciated. Ultimate players are typically fun, adventurous and competitive. The competition evolved from a typical run and jump layout, to acrobatic, stunt-filled layouts.”

The cheering mobs of Ultimate players voiced their appreciation as competitors jumped over fellow athletes to layout for the catch. They jumped over other objects found around the course, signage, chairs, and even the hood of a car on one occasion.

“Once the first player did something crazy the first year, everyone after that tried to do something more impressive,” Murphy said.

While she was equally exhausted after spending two full days in the summer Florida sun, Murphy has fond memories of her creation enjoyed by so many.

“I think the most impressive were the layouts through a hula hoop and the one through the minivan doors,” she said.

It was Matt Terza, of Gainesville, who dove through one side of open minivan doors to emerge on the other side and catch the disc to win the 2012 Ultimate Layout competition in Gainesville. The seats of the van were removed.

It gave the players from the tournament a chance to gather around at the end. Prior to heading back home to begin another week, it gave athletes a final chance to unwind, laugh and watch some great athletic feats and silliness.