TALLAHASSEE, Fla. –There are a few seconds, as the clock winds down just before Florida Senior Games Cycling Time Trials riders take off from the starting line, when they put their race in the hands of the volunteer standing directly behind them. 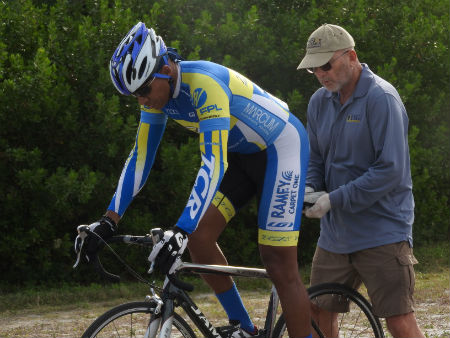 They are literally being held upright by the holder, with their spikes firmly planted into the pedals of their bikes.

The countdown hits zero and the holder, who is strad­dling the back wheel of the bike, releases the rider as he or she begins pedaling. The rider is on his or her way in the 5K and 10K Time Trials where competitors reach speeds of up to 25 to 30 miles per hour on bikes costing thousands of dollars.

In an annual event like the Florida Senior Games, featuring thousands of athletes in more than 20 sports and events over nine days, volunteers like Dutch Van der Kuyp are vital.

Dutch has been an avid cyclist for over 35 years, a member of the Caloosa Riders Club in Fort Myers, and a volunteer who gladly accepted the seemingly thankless job of serving as the Time Trials holder.

Besides his volunteerism, he also participated as an athlete, in the 65-69 age group. He was a gold medal winner in the 2007 and 2008 Florida Senior Games Time Trials events riding his recumbent cycle. When he turned 50, Dutch started riding his age in miles for his regular rides.

He made a niche for himself in a specific job at the Florida Senior Games, but many more are needed. Fortunately, there’s something for everyone at the Games, which feature athletes age 50 and over.

“They call me the holder,” Dutch says, describing his duty. “When the clock hits zero, the riders feel safe because, as a cyclist myself, I know what has to be done. I’ve never had anyone wobble or fall when they take off. Their starts are always nice and straight.”

The holder’s job is a tough one, done in a variety of ele­ments, rain or shine and in warm and cold weather. It comes with some side effects at the end of the day.

“I will admit, my back hurts when I get home,” he said. “Some of the male riders are 200 pounds and over, and if they begin to lean to one side or the other, I have to straighten them out. That’s tough with some of the guys.”

Dutch began his volunteer efforts when the Florida Senior Games were held in Fort Myers and the City of Cape Coral from 2006-10 and again in 2013-14. The cycling events were held in his own backyard in Cape Coral. He also made the trip to Fort DeSoto Park to lend his efforts, when the Games moved to Clearwater and Pinellas County in 2015, as the riders place their trust in him just before they leave the starting line.

“I can’t just sit and watch,” he says. “When the event organizers see me and some of the other experienced volunteers, they can be at ease because we know what we need to do.”

Florida Senior Games cyclist Pete Butler, of Tallahas­see, is one of those put at ease when he sees Dutch at the starting line.

“He’s so calming because when you come to the starting line, every athlete has a bit of the jitters,” Butler said. “He’s kind and strong, and his duty is highly specialized. He’s someone who has you with­out any risk of falling over. That means the world to a competitive cyclist. I’ve raced all over the country, and he’s one of the best I’ve ever encountered.”

Other volunteer opportunities include scorekeepers in 3-on-3 Basketball and Basketball Shooting, manual backup timers in Swimming, athlete check-in at event registration tables, assisting with presentation of medals to athletes, scorekeepers in a variety of sports and many more vital duties in event operations.

Many senior-age volunteers have been inspired by their fellow 50 and over individuals, they have returned in following years as athletes.

To become a valued volunteer at the Florida Senior Games, please visit https://floridaseniorgames.com/volunteers/