TALLAHASSEE, Fla. –On the morning of December 14, 2014, Florida Senior Games track and field officials called the 27 women running in the 50-meter dash to the starting line at South Fort Myers High School.

During that time, runners received instructions from the USA Track and Field officials. For many, it’s an obligatory thing, having run in plenty of races over the years.

Once the pre-race instructions are delivered, the athletes wait in the staging area, in their assigned lanes and in heat order, for the prior race to complete and the preparations for the next race are finalized.

Some runners do some last-minute stretching, others keenly focus on what they need to do run their best race.  Some veteran Florida Senior Games athletes, like 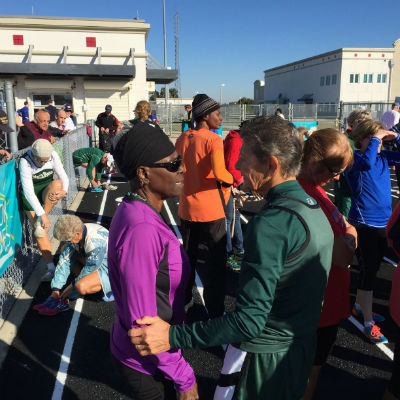 Joann Sampson (in purple) and Madelaine “Tiny,” Cazel (in green) may take a minute for a heart to heart talk.

That seems to be the case in this photo.

The body language in this conversation between Sampson, from Hallandale, and Cazel, from The Villages, who have run many races together between 2002 and present day, is one of comfort. Tiny is calmly clutching Joann’s forearm, as the two look at each other eye-to-eye, being the same height.

They could be talking about Tiny’s five gold-medal winning performance the day before in field events. Quite possibly, Joann was there watching her nearly 68-foot discus throw, which was the third longest throw of all 21 athletes in the event. Sampson and her husband, John, are two of the most supportive friends of fellow senior games athletes.

They could be catching each other on their families. Both provide an excellent role model for their children and grandchildren. Cazel’s family has traveled to the Florida Senior Games and National Senior Games to watch her compete.

Sampson’s grandchildren speak proudly of their grandmother’s achievements, telling their friends, “My Grandma’s Got Game.”

“It’s what I do and a lot of people know me from the Florida Senior Games,” said Sampson. “I’m proud to be a Senior Athlete and the Senior Games gives me a platform to talk about it. We’re like a big family.”

Taking a closer look at the photo, a couple of other Florida Senior Games regulars are among the waiting crowd of runners.  Kneeling, to Sampson’s left is Marty Barlow-Beighley, from The Villages, who won a gold medal in the 70-74 age group with a time of 9.14. Marty seems to be changing from a casual pair of shoes into her sprinting shoes, along with another runner from The Villages Track Club.

To Cazel’s right, in the red shirt, is Neva Weisskopf, from Lehigh Acres, who had a fourth-place finish in the 65-69 age group with a time of 9.40. During their professional careers, Weisskopf and Sampson were both school teachers and have probably shared a story or two while waiting for their events.

To illustrate the tight-knit community of Florida Senior Games athlete, when Sampson and Cazel began competing in the Games in 2002, Sampson was in the 60-64 age group and Cazel was in the 65-69 age group. The pair have continued their successes into the 75-79 and 80-84 age groups, respectively.

“All the girls from Florida are great,” said Cazel. “It’s funny but we do get together at all of the meets. Joann is a warm, friendly person. She’s always inviting and it’s good to see her.”

The Florida Senior Games, now in its 29th year, brings together athletes from around the state of Florida, to compete in various events. Whatever the age group, the athletes are supportive of one another, which many times leads to friendships that carry on beyond the field of play.