FORT LAUDERDALE, Florida - The 30th Annual Florida Senior Games began nine days of competition with seven sports on Saturday. Five sports were on the courts as Basketball Shooting, 3-on-3 Basketball, Racquetball, Shuffleboard and Tennis were on their respective courts. Cyclists were on their bikes on the roads of Martin County and Archers were on the range at Fort Lauderdale Archers. 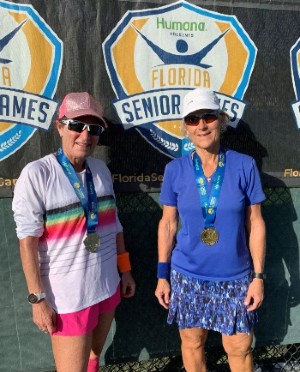 Over 1,700 athletes, age 50 and over, have registered to compete in the 2021 Florida Senior Games, presented by Humana, in the Greater Fort Lauderdale area and other Florida locations.

In the northwest corner of Broward County, at the Tennis Center of Coral Springs, Cheryl Domingo, of Punta Gorda (right in photo), and Loren Levine, of Boca Raton (left in photo), faced off in an epic 2 ½ hour championship final in the Women’s Singles 55-59 age group.  Domingo won the first set 7-6 and Levine took the second 6-1, to set up a 10-point tiebreaker.

The pair were never more than two points ahead of one another in the tiebreaker and were tied at 10, 11 and 12.  Domingo, who won the Women’s Singles gold medal in the 50-54 age group in 2020, picked up the last two points to win the final set 14-12.  She admitted to having cramps in her calves in the last set.

At Fort Lauderdale Archers, 10 age group records were set by archers shooting from 40, 50 and 60 meters. Leonard Caillouet, of Gainesville, tied the Olympic Recurve 60-64 age group record and all-time best score in the event with an 835. Tim Walter, of North Fort Myers, established the mark in 2020 and came in second behind Caillouet, 24 points behind.

The Broward Heat Women’s 50-54 age group team won its three games by an average margin of 37 points, scoring an average of 61 points per game in the team’s three wins.

In the Basketball Shooting competition, Harry Carothers, of Pinellas Park, won three gold medals, in the 75-79 age group, with the overall high scores in Free Throw Shooting and Spot Field Goal shooting. Carothers hit 28 of 30 free throws, connected on 11 of 15 field goals from various spots on the court and had a score of 76 in Time Field Goal Shooting.

Carothers, the 2004 Florida Senior Games Male Athlete of the Year, had not played basketball in the last two and half years, due to back and knee surgeries and gym closures due to the Covid-19 Pandemic. He was also a gold medal winner for the Clearwater Aces 75-79 Age Group 3-on-3 Basketball team.  The Aces were undefeated in three games.

In Men’s Singles Racquetball, Gene Fry, of Casselberry, won his third gold medal in four years, defeating Mike Boyer, of Delray Beach, 15-10, 15-7 in the Championship match of the 65-69 age group.  Frey was undefeated in three matches, losing only one of the seven games he played. Men’s Doubles Racquetball continues on Sunday at the Dave Posnack Jewish Community Center.

At the Shuffleboard competition, held at the Sebring Recreation Club, Virginia Bauman, of Auburndale, repeated as the gold medalist in the Women’s Singles 75-79 age group, as well as, Gail Howell of Leesburg, in the 80-84 age group.

Myers Parrish, of Sarasota, began competing in Florida Senior Games Archery in 1997 and shot a 678 in the Men’s Compound Release, 75-79 age group.  Also recognized from Archery, was sport director Tim Austin, who has been involved in all 30 of the Florida Senior Games.

Harry Carothers, who won his first Florida Senior Games gold medal in 1999, added four more between three basketball shooting golds and one in the Men’s Team Basketball with the Clearwater Aces.

The 2021 Florida Senior Games, presented by Humana, are an annual event of the Florida Sports Foundation, the lead sports promotion and development organization of the State of Florida, and are presented in conjunction with the Greater Fort Lauderdale CVB.

Results are available at www.floridaseniorgames.com/results and follow the Florida Senior Games on Facebook for more interesting stories throughout the remainder of the Games.