UNITED NATIONS – The United Nations General Assembly (UNGA) Wednesday adopted a resolution in “solidarity with and support for the Government and people of Saint Vincent and the Grenadines, as well as neighboring countries affected by the impact of the eruptions of the La Soufriere volcano” 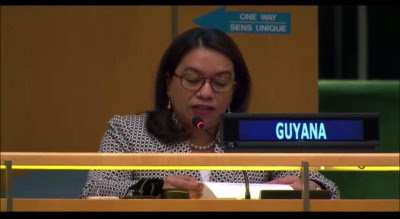 The resolution received overwhelming support, with 174 of the 193 member states co-sponsoring the resolution, which was adopted by consensus.

In her statement, Ambassador Rodrigues-Birkett highlighted the “deep concern about the serious consequences of the explosive eruptions of the La Soufrière volcano …since 9 April 2021 which has resulted in the displacement of residents, loss of livelihoods, food security and nutrition, health security, and access to social infrastructure, and about the urgent need to restore normal conditions for the population”

She said that for more than two weeks, St. Vincent and the Grenadines has been in the throes of a series of explosive volcanic eruptions, describing the situation as a “crisis of historic proportions. “Nearly one-fifth of the island’s population has had to be evacuated from the immediate disaster area which covers approximately one third of the island. The ongoing explosive volcanic eruptions are compounded by the multidimensional challenges of the COVID-19 pandemic, and comes before a predicted active hurricane season that begins in a few weeks.  These are all severe shocks beyond domestic control and demonstrate the vulnerability of Small Island Developing States,” the Guyanese diplomat said.

The resolution underlines the special needs and challenges of St. Vincent and the Grenadines and the affected neighboring countries and welcomes the generous and immediate assistance that has been provided by CARICOM and other neighboring countries, as well as by other states and national, regional and international organizations, particularly the United Nations system.

St. Vincent and the Grenadines Permanent Representative I. Rhonda King, expressed sincere gratitude on behalf of her country for their invaluable support for the resolution, extending appreciation “to all of the Americas, who has rallied to our cause.”

Ambassador King welcomed the launch of the United Nations Global Appeal Fund for St. Vincent and the Grenadines and neighboring countries, stating that “without the immediate and sustained solidarity from the United Nations, our regional/sub-regional organizations, neighbors and countries near and far, our life and living would be completely unbearable. We thank you.

Crediting the new reforms of the UN system, Ambassador King said “it is important to note that within 24 hours of the first set of explosive eruptions, my Prime Minister received a personal call from the UN Secretary General, Antonio Guterres.

“Two days after that, the UN Resident Coordinator for Barbados and the Eastern Caribbean based in Barbados, 100 miles east of St. Vincent, arrived by boat because the airspace was closed,” she said, thanking the international community for its solidarity and reiterated strong commitment to working with the governments, intergovernmental and regional organizations, international financial institutions, and the private sector in the recovery process.

Grenada’s Permanent Representative, Keisha A. McGuire, who is also Vice President of the UNGA, presided over the session.