PORT AU PRINCE, Haiti – With an increase in reports of daily kidnappings across the country, truck drivers from the neighboring Dominican Republic have decided not to enter Haiti deliver goods and produce. 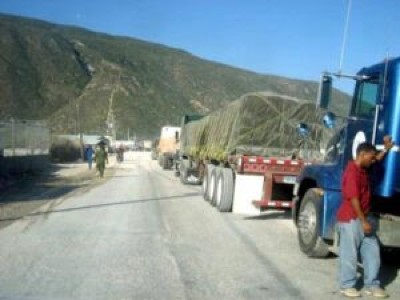 This measure has been adopted by Dominican drivers who travel from the National District and the provinces of Santiago, Valverde, Puerto Plata, La Vega among others.

Based on this decision, these carriers unload their goods in the border area and the Haitian carriers are responsible for picking them up and delivering them to their recipients in Haiti.

According to René Bazin, several of his colleagues were victims of the looting of their trucks while traveling in Haiti.

He explained that the gangs in addition to kidnapping for ransom, are dedicated to looting trucks, tankers and other vehicles that transport food, building materials, household and electrical appliances, among others… adding “It pains me to say it, but my country is currently unlivable, many of my colleagues want to stop transporting, because there is no security for anyone.”

For his part, Juan Marte the President of the National Central of Transport Workers considered wise the decision of Dominican carriers to refrain from entering Haiti with vehicles containing food and other goods.

“It’s the right thing to do because it’s not fair that drivers risk their lives for a few more pesos,” he said.