WASHINGTON DC - Chairman of the CARICOM Council for National Security and Law Enforcement (CONSLE) and Jamaica’s National Security Minister Dr. Horace Chang, says the illicit trafficking of illegal firearms is a significant challenge for the region. 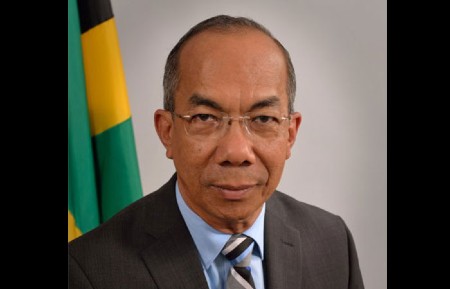 Chairman of the CARICOM Council for National Security and Law Enforcement (CONSLE) and Jamaica’s National Security Minister Dr. Horace Chang. (File Photo)Addressing today’s Committee meeting on Hemispheric Security at the Organization of American States, by video-conference, Dr. Chang pointed out that “the Caribbean accounts for approximately 23% of all recorded homicides, with an average homicide rate of 15.1 per 100,000 people, which is nearly three times the world average.”

The Jamaican National Security Minister told the hemispheric Security officials that “the proliferation and increased access to illegal firearms accounts for the high level of armed violence and insecurity within our regions.”

Dr. Chang pointed out that “the firearm is the weapon of choice for committing homicides and other acts of crime and violence. In this regard, I have to underscore the need for greater collaboration and partnership to combat the scourge of the illicit trafficking of firearms,” he declared.

“This is directly linked to the steps being taken by IMPACS to strengthen the capacity of Member States in the region to successfully detect and prevent these illegal firearms from entering our shores,The CONSLE Chairman noted. In addition, he said “ the region must continue to commit to regional mechanisms that support firearm ballistics gathering and information sharing.”

Turning to drug trafficking, Dr. Chang pointed out that “the illicit trafficking in drugs through our regions operates in tandem with mechanisms supporting the legal trade.

“The UNODC reports that the number of new psychoactive substances emerging on illicit drug markets has increased six-fold in the past decade and reached a record high of over 1,000 unique substances in 2020,” he observed.

“Specifically, annual global seizures of amphetamine-type stimulants increased by 64 per cent in 2019, while opioid use disorder deaths have gone up by 71 per cent over the past decade. To cauterize the challenges identified facing our regions, there is an urgent need to implement comprehensive coordinated responses to drug demand and illicit drug trafficking,” the CONSLE Chairman declared.

“In the area of maritime security,” Dr. Chang said “the challenges faced have underscored the need to leverage technology, including through the use of satellite imagery, radar and surveillance systems, and other maritime domain awareness infrastructure.”

“We therefore have to identify opportunities to re-engage our strategic partners to strengthen the existing maritime framework and build on the work of CARICOM IMPACS, which provides maritime data on high risk vessels on a daily basis to several countries in the region,” he stressed.

“Mr. Chairman, the commitment to enhancing maritime security, especially with countries in CARICOM having landmasses one-tenth of their Exclusive Economic Zones is of paramount importance.

He said this was especially important as “Member States are located along the crossroad between North and South America, which intersects the transshipment routes in the illegal guns for drug trade. This reality warrants coordinated responses to maritime crime and maritime domain awareness.

Dr. Chang pointed out that In Small-Island and Low-Lying Coastal Developing Member States such as the CARICOM Member States, the effects of transnational organized crime may be seen in the growing environmental threats caused by the illicit trade in natural resources, deforestation and coastal management.

He said in this regard, CARICOM’s Implementation Agency for Crime and Security, IMPACS, was working with Member States to leverage the border security systems in the region, to fully utilise passenger name record and advanced passenger information, to identify persons of interest through risk assessments and pre-screening.

He advised that this Comprehensively addressed all forms of trafficking in persons, migrant smuggling and illegal migration are integral in the fight against transnational organised crime.

He said IMPACS has been taking steps towards the maintenance and strengthening of information sharing and communication between law enforcement counterparts in the region in respect of human Trafficking, and all other relevant cross border security considerations.

It is imperative for countries within the regions to continue to protect victims; prevent the occurrence through raising awareness; and prosecute and convict perpetrators of these crimes.

Dr. Chang said It was also critical that States move with alacrity to strengthen, adopt and implement measures at the national levels in line with relevant international legal frameworks, including international humanitarian, human rights, and refugee laws.

Turning to the area of cyber crime, Dr, Chang noted that “among the emerging security concerns in our respective regions, cybercrime has evolved and is growing in the context of the COVID-19 pandemic through online fraud, extortion and online child sexual abuse targeting vulnerable individuals, as well as through ransomware that primarily compromises systems, including hospitals.

The National Security Minister was supported at today’s Hemispheric Security Meeting by Jamaica’s Permanent Representative to the OAS and Ambassador to the United States Audrey P. Marks.