The annual Trelawny Picnic in New York, returning after a two-year COVID-enforced absence, drew more than three thousand Trelawnyites from across the United States, Canada, and Jamaica to the Rockland County State Park in Nyack, upstate New York, this past Sunday, May 29. 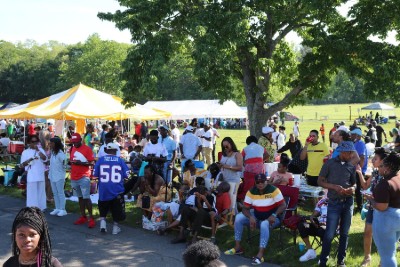 A section of the large crowd that turned up for the annual Trelawny Picnic on Sunday May 29 at the Rockland County State Park in Nyack, New York. (DERRICK SCOTT photo)Unbridled delight oozed from the picnic goers as they started streaming in from about 7:00 a.m., to fill the recreation site, home to this annual Jamaican festival-like gathering for over forty years.

By midday Sunday, the numbers had swelled, the grills fired up, the aromas wafting through the park, far and wide. Families, friends, and acquaintances old and not-so-old, hailing from all corners of the parish of Trelawny in Jamaica, coming together to have a grand time.

They take with them tents, their ever-present Reggae music and fancy grills and gear, as well as their famous Trelawny yams stuffed with cod fish, with ackee and roasted breadfruit on the side in the company of other Jamaican delicacies which many had stored up over the course of the year, to boast and share with their friends and parishioners.

And, of course, nothing is ever for sale…. all is shared! It's really an All Trelawny Family Affair and continues as it was first conceptualized over forty years ago when a few friends from Falmouth – Horace Harrison, Linval Brown, Richard Chambers, Eli Nish, Mr. and Mrs. DK Mullings and Peter HoShing – got together in their backyard on the Memorial Weekend Sunday. Thus, was born an annual event.

In Richard Chambers’ telling, the picnic sprang from a 1970s Bronx, New York, backyard barbeque for people from Falmouth. Over the years, it has

been a draw for Trelawnyites from far and wide. “In a short while, it became known as the Falmouth picnic. We then started to invite friends from Duncans, Clarks Town and other areas of the parish,” Chambers recalls.

“As the gathering grew, it took on the name of the ‘Trelawny Day Picnic’ and has ballooned to the extent that one year, we had over six thousand people at the upstate New York meeting place, all claiming to be from Trelawny,” says Chambers, the now Dallas Texas resident pleased the event has not lost its character as a “family” affair that now boasts first- and second-generation Trelawnyites in attendance.

“The fact that I take the most pride in is that in over forty years, we have never had an incident where we have had to invite law enforcement to be involved,” Chambers stresses as a credit to the people of the parish.

Falmouth’s mayor and Trelawny Municipal Corporation chairman Colin Gager, a regular at the annual fun gathering, was none too shy about making it known he was back Sunday, touring the grounds, greeting picnic goers with relish: “I am here again at the Trelawny Reunion. Now COVID has eased and of course we get a chance to sell Falmouth – and Trelawny as a whole – and that is one of the reasons why I am here today.”

Gager doubled down on his sales pitch for his parish: “On June 17, we will be having the groundbreaking of the new Fire Station in south Trelawny and before that, on June 16, we will be having the handing over of the new repaired Market and Transportation Centre in Clark’s Town. We have constructed a drop-in center, which will house the homeless on a nightly basis. This was the first of its kind outside of Kingston, where we feed the homeless,” Gager explained.

Garth Wilkinson, councilor for the Falmouth Division, himself another regular, had journeyed from Jamaica, too, not wanting to miss out on this excitingly Trelawny tradition.

Getting in on the act as well, Trelawny’s Custos Rotulorum, Hon. Hugh Gentles, sent a message to mark the occasion, thanking organizers and

guests for “staying the course with us for 42 years through thick and thin. The contribution of the diaspora to Jamaica is special.

“You, as sons and daughters of Trelawny, have helped us to evolve as a parish; to grow in a sustainable way in line with global changes. We can overcome social challenges effectively with your support and so we cherish our enduring relationship.”

By the time Sunday turned to sundown, the reality began to set in that all good things must come to an end. Reluctantly, but facing reality, the diaspora Trelawny people pulled themselves together and mustered the courage to say goodbyes. And clearly, one gets the sense that it won’t be long before the planning starts up for next year’s event – to once again showcase the pride of Trelawny.