UNITED NATIONS – Trinidad will early next year host an international conference focused on combating the threat of terrorism in the Caribbean. 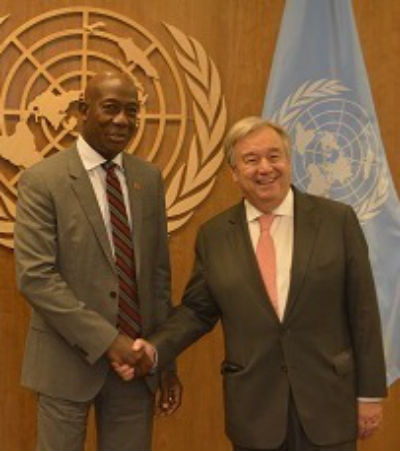 According to a statement issued by the Office of the Prime Minister in Port of Spain, Rowley also met with Vladimir Voronkov, the under-secretary general of the U.N. Counter-Terrorism Office (UNCOT).

The conference will be held in Port of Spain.

It is expected to support collaboration between UNCOT and the Caribbean community (CARICOM) for the implementation of a regional counter terrorism strategy.

“Dr. Rowley welcomed the opportunity to discuss and deepen Trinidad and Tobago’s co-operation with the United Nations on matters related to counter-terrorism which remains a matter of significant importance to the government,” a T&T government statement noted.

Rowley was among CARICOM leaders who attended the U.N. General Assembly, which was held under the theme “Galvanizing multilateral efforts for poverty eradication, quality education, climate action and inclusion”.