Nationals of Trinidad and Tobago can look forward to a “bright” future, according to newly re-elected Prime Minister Keith Rowley, after his People’s National Movement (PNM) won the majority of seats in last month’s general elections. 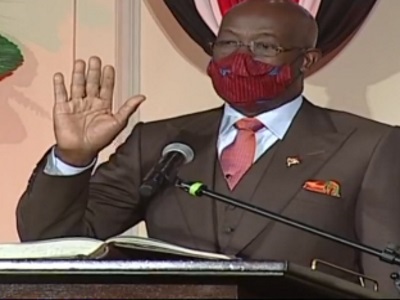 Rowley is sworn in for a second term as prime minister.Addressing supporters at his victory party, after preliminary Aug. 10 election results showed the PNM retaining power in the twin island republic by claiming 22 of 41 seats in the House of Representatives, Rowley projected rough roads in the near future, but promised the nation would eventually embrace good times.

“The future of Trinidad and Tobago is bright,” he said. “We have some difficult days ahead, but as dark clouds may bring showers, thunderstorms and lightning, behind that is the bright sunshine and the warmth.

“So the passage of the storm is to be survived and the good weather after is to be enjoyed.

“… Our projections are that the next two years would be difficult, very difficult,” Rowley added, “but during that period, we are required to do certain things that will put us in a better position to enjoy the rest of that future which guaranteed to us.”

The prime minister called on T&T nationals to unite to build the Caribbean nation.

Rowley said his government’s priority would be to “ensure that all those who call Trinidad and Tobago home, that they live here with respect and in dignity and the people and the government will play its role.”

The prime minister vowed his government’s plan is to “build an economy” that will allow all citizens to benefit.

“(An economy) that will grow in such a way that all of us will be lifted by that rising tide of the future, where all boats will be lifted and we’ll all then be able to say ‘Mother Trinidad and Tobago is good to us’.”

In the short term, Rowley added, the priority will be to ensure “no one is left behind” and benefits are spread fairly across T&T.

He said the government plans to stick to fulfilling campaign promises because it has been given that power by the electorate.

The prime minister said his Cabinet would reflect meeting those commitments. For example, he promised to “digitize this country” and offer training for young people to expand agriculture.

Rowley, who turns 71 next month, did, however, acknowledge his own political career - which spans more than four decades - was in its twilight years. Therefore, he vowed to spend time grooming young people for political responsibilities they must embrace in the future.

“This, ladies and gentlemen, could easily be my last term in politics in Trinidad and Tobago,” Rowley explained.

“I’m not one of those politicians who believe that when you come into office your should go out feet first.”

He said he had a “duty and responsibility” to develop the youth in his party, but insisted he would “continue to provide this country with stable and sober leadership.”