PORT OF SPAIN, Trinidad,  – Caribbean Community (CARICOM) leaders Thursday pledged their ongoing commitment to help St. Vincent and the Grenadines deal with the impact an erupting La Soufriere volcano that has so far resulted in the evacuation of thousands of residents on the Caribbean island. 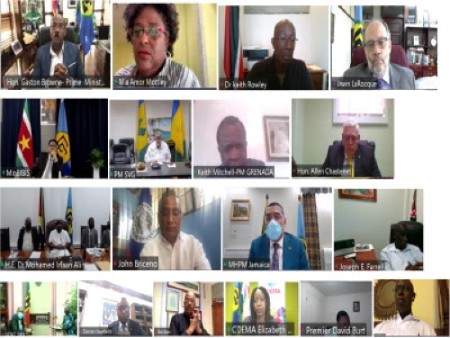 CARICOM leaders at emergency sessionA statement issued after the regional leaders met virtually under the chairmanship of Trinidad and Tobago Prime Minister Dr. Keith Rowley, noted that the special emergency meeting “committed to continue providing extensive support to St Vincent and the Grenadines and pledged solidarity with that member state as it strove to cope with the disaster”.

The volcano erupted last Friday and has been spewing ash and emitting pyroclastic flows. The eruption came three months after it began to erupt effusively and came a mere 15 hours after the local authorities had issued an evacuation order, having been advised by lead scientist Professor Richard Robertson that the monitoring team could not give an exact date of the eruption.

The violent eruption sent plumes of ash 29,000 feet into the atmosphere, but was surpassed by an even more powerful one that same afternoon, which sent ash 50,000 feet into the sky. The volcano has been erupting daily for the past seven days.

St. Vincent and the Grenadines Prime Minister Dr .Ralph Gonsalves “briefed” his colleagues on the situation.

Gonsalves said that more than 10,000 people had been evacuated from the immediate disaster area covering approximately one third of the island. He said they are being housed in shelters and at homes of family and friends. Accommodation for evacuees is also being arranged by neighboring states.

The meeting also received information from the Barbados-based Caribbean Disaster Emergency Management Agency (CDEMA) which is coordinating the regional response to the event.

Gonsalves thanked the regional governments as well as the various regional institutions “for their overwhelming support.

He praised the work of the Trinidad-based Seismic Research Centre (SRC) of the University of the West Indies (UWI) which has been monitoring the volcano and expressed his deep appreciation for the efforts of CDEMA, the Regional Security System (RSS), the Caribbean Public Health Agency (CARPHA) and the CARICOM Implementation Agency for Crime and Security (IMPACS) in assisting the country.

The statement said that the regional leaders were informed that “the situation would be prolonged given the level of uncertainty in respect of the behavior of the volcano.

“The ash and the pyroclastic flows have decimated crops and vegetation and compromised water sources. Food and water were identified as among the primary needs,” the statement noted.

It said that member states indicated the level of support that had already been delivered and committed to providing further financial, technical and material support, in particular food and water. Security assistance is also being provided.

Barbados Prime Minister Mia Mottley, spoke of the effects of the “unprecedented” heavy ashfall across that island which has resulted in major disruptions to the infrastructure including the closure of the Grantley Adams International Airport.

She said it was having an adverse effect on the tourism sector and the wider economy and the CARICOM leaders pledged their support and solidarity with Barbados in treating with this significant challenge.