PORT OF SPAIN, Trinidad – Sixty-seven year- old Kamla Persad Bissessar was appointed Opposition Leader in Trinidad and Tobago late last month, promising to lead a “formidable” team that would work in the best interest of the Caribbean nation. 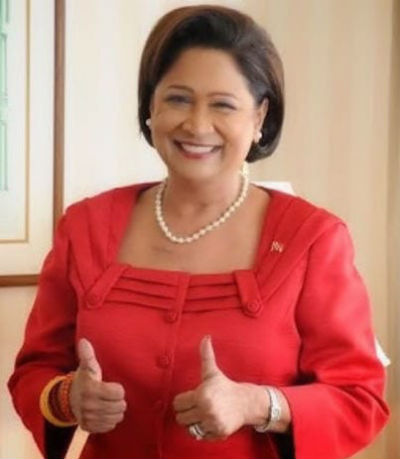 “Persad Bissessar” Persad Bissessar, who led the main Opposition United National Congress (UNC) to defeat in the Aug. 10 general elections, said that the Opposition would seek to provide support for T&T’s development inside and out of the Parliament. But she warned that “my colleagues and I will no longer be used as an excuse for poor governance and poor performance.

“We will not be painted as an obstructionist, but I tell you we pledge to work in the best interest of all the people of Trinidad and Tobago,” she said, adding “we will stand strong and resolute in commitment to a better Trinidad and Tobago.”

Persad Bissessar said T&T and the world are facing “dark times” as a result of the coronavirus (COVID-19) “and all I can say is let us pledge to work together” promising that the Opposition will make its contribution to the socio-economic development of the oil rich twin island republic.

Persad Bissessar said she was thankful to her colleagues for putting their trust in her becoming Opposition leader, a reference to calls that had surfaced following the electoral defeat for her to step down as both Opposition leader and leader of the UNC.

“I thought long and hard before accepting this appointment, your excellency, I weighed all the pros and cons,” she said.

“I listened to the opinions offered and the support for our great party continues to pour in and it became more and more obvious to me that my work is not yet complete and therefore I thank you today for this appointment.”