WASHINGTON, DC – The Pan American Health Organization (PAHO) says the official portrait of its outgoing Dominican-born Director, Dr. Carissa F. Etienne, was unveiled on Friday at the Embassy of Sweden in Washington. 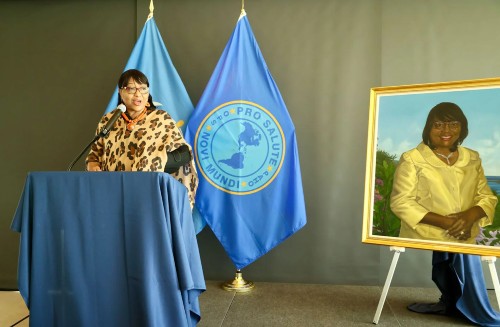 PAHO said that Etienne, who is retiring after 10 years as director, was declared Director-Emeritus on September 30, 2022 at the 30th Pan American Sanitary Conference.

“From a little girl in Massacre, Dominica, walking bare foot, going to school, being as every other child was. If that child can rise to become director of PAHO, then there is hope for every child that walks the streets of the Americas (including the Caribbean),” said Etienne during the ceremony. “And if we keep that in our minds, we will do whatever it takes to ensure that child really develops.”

PAHO said the portrait was painted by Greg Bailey, a young Jamaican fine artist who specializes in depicting persons of color in the context of postcolonialism.

“Representation is very important,” said Bailey, thanking PAHO for selecting him as the artist.

“Over the course of the process, I think I managed to do justice to the portrait while successfully capturing the essence of Etienne – her beauty, her warmth, her posture and how she is positioned in her homeland of Dominica,” he added.

PAHO said that, throughout her tenure, Etienne strengthened the health organization’s technical cooperation, and “spearheaded innovative partnerships with both foundations and the private sector.

“She championed the achievement of Universal Health as an overarching goal for the Americas, based on the primary health care approach,” said PAHO, stating that this included developing strategies, policies and plans to expand access to comprehensive care, particularly for vulnerable populations.

In underserved and rural areas, PAHO said Etienne strengthened governance and stewardship in health, and improved financing for health and intersectoral action to address the social determinants of health.

PAHO also said that Etienne established its Department for Non-Communicable Diseases and Mental Health, advocating for policies to increase taxes on unhealthy food products and scaling-up interventions aligned with the Framework Convention of Tobacco Control.

In addition, PAHO said she led the organization’s drive towards the elimination of diseases, such as HIV, malaria, trachoma, lymphatic filariasis, Chagas and others, and mobilized programs to prevent and control non-communicable diseases.

In her home-region of the Caribbean, PAHO said Etienne spearheaded efforts to help countries adapt and respond to “ever-increasing” climate-related disasters, including hurricanes and floods.

“The SMART Hospitals Network, which began in 2015, has since facilitated the retrofitting of 50 health facilities in the small island states of the Caribbean to become safe, green and resilient to climate-related disasters,” PAHO said.

“With the second half of her tenure defined by the COVID-19 pandemic,  Etienne’s leadership was crucial in enabling the region to prepare for and mitigate the worse effects of the pandemic,” it added.

Under her leadership, PAHO said its Revolving Fund for Access to Vaccines delivered over 151 million COVID-19 vaccines, “contributing to the swift roll-out of this life-saving technology in the region.”

Thanking PAHO staff for their support throughout her tenure, Etienne said: “I was able to do what you allowed me to do. What you supported me to achieve. I look like a good director because of you.”

From March 2008 to November 2012, Etienne served as assistant director-general for Health Systems and Services at the World Health Organization (WHO) in Geneva, Switzerland.

Prior to that, as assistant director of the Pan American Sanitary Bureau from July 2003 to February 2008, she led five technical areas: Health Systems and Services; Technology, Health Care, and Research; Health Surveillance and Disease Management; Family and Community Health; and Sustainable Development and Environmental Health.

It says she has also spearheaded policy directions for reducing health inequalities and advancing health for all through universal coverage, people-centered care, the integration of health into broader public policies, and inclusive and participatory health leadership.

She has also led the WHO global agenda to support universal access to “safe and efficacious medical products” and the development of a global code of practice for the international recruitment of health personnel.

She also chaired the International Health Partnership (IHP+) initiative, which seeks to commit partners to work together and put into practice international principles for effective aid and development cooperation in the health sector.

Etienne began her career in her native Dominica as a medical officer at the Princess Margaret Hospital, and was later appointed as the Chief Medical Officer of that country.

She has also served in other high-level posts in Dominica, including director of Primary Health Care Services, coordinator of the National AIDS Program, disaster Coordinator for the Ministry of Health and chair of the National Advisory Council for HIV/AIDS.

She received her medical degree (Bachelor of Medicine and Bachelor of Surgery-MBBS) from the University of the West Indies, Mona Campus, Jamaica, and her Master of Science Degree (MSc) in Community Health in Developing Countries from the London School of Hygiene and Tropical Medicine, University of London.

Dr. Jarbas Barbosa da Silva, who will replace Etienne, will be sworn in on January 31, 2023 as director of the Pan American Sanitary Bureau during a ceremony beginning at the Hall of the Americas, headquarters of the Organization of American States (OAS) in Washington.

Barbosa da Silva, a national of Brazil, was elected on September 28, 2022, by PAHO member states during the 30th Pan American Sanitary Conference.