BRADES, Montserrat,– The government of this small British overseas territory that was devastated by volcanic eruptions 26 years ago, is exploring what humanitarian, technical and/or in-kind contributions it can give to St. Vincent and the Grenadines where the La Soufriere volcano erupted on Friday. 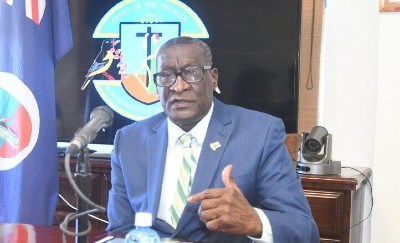 Premier Joseph FarrellPremier Joseph Farrell, in a statement issued on the heels of the explosive eruptions that began less than 24 hours after an evacuation order was issued for residents near the volcano, expressed his country’s support for the government and people of St. Vincent and the Grenadines.

Farrell said he had convened an emergency stakeholder meeting on Friday afternoon “to explore what options are possible to provide humanitarian, technical and/or in-kind contributions to help St. Vincent and the Grenadines meet the immediate needs of their volcanic emergency”.

“On Monday, April 12, Cabinet will consider the options open to Montserrat and provide ministerial confirmation of Montserrat’s commitment,” he said. “The public will be informed at a later date of the nature and type of contribution Montserrat is able to commit to as part of emergency efforts to assist St. Vincent and the Grenadines.”

In 1995, there was a series of eruptions at Montserrat’s own Soufriere Hills volcano that left more than half the tiny island uninhabitable, destroying the capital city, Plymouth, and causing widespread evacuations. About two-thirds of the population left the island, relocating to neighboring islands like Antigua and Barbuda, as well as to Britain.

At least nine people were killed and about 150 homes were destroyed in the eruptions.

Up to Friday afternoon, two eruptions had been recorded at La Soufriere, with scientists warning there could be more in the coming days and weeks.

Premier Farrell said that mindful of their past experiences with Soufriere Hills, the “government and people of Montserrat continue to hope and pray that the people of St. Vincent and the Grenadines are spared further explosive eruptions”.

He said he was confident that people would “rally around our Vincentian brothers and sisters living in Montserrat, as they too remain very concerned about the developments in their homeland, and the consequent dislocation of some of their family members”.

Farrell said that prior to St. Vincent and the Grenadines Prime Minister Dr. Ralph Gonsalves issuing an evacuation order for communities in the hazard zone on Thursday afternoon, he had been in communication with him to express Montserrat’s solidarity and the willingness to provide support.