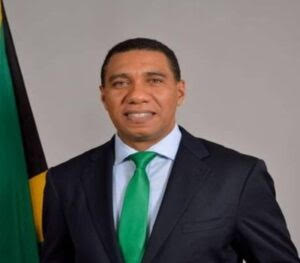 Speaking on Thursday during an online Climate Change Summit, the Prime Minister joined other world leaders to call for a combined effort to reduce climate change, which he said is affecting small states in disastrous ways.

According to Holness, the COVID-19 pandemic has exposed the vulnerability of small and developing states to shock, which could be heightened by the effects of climate change.

He said developing states governments are now having to choose between addressing the effects of the pandemic and mitigating against future climate shocks.

He however, stated that Jamaica has remained committed to advancing climate action and is determined to build forward stronger, better and greener.

“Withstanding the challenges, Jamaica has enhanced its national determined contributions to target a 60 per cent reduction in emissions by 2030.

“Jamaica has great sprinters and we know that a great start does not guarantee a win, it requires momentum building. In this case an accessible and equitable climate finance mechanism. We have raised our ambition and now call on major economies to step up and sprint with us to the finish line. We can win this, but we must act now,” he said.

Holness also called for a commitment to honoring and increasing the $100 billion per year for climate action in developing countries.

“While increasing the quantum of financing is necessary, it will not be sufficient to address the needs of small island developing states unless it is accessible and flexible enough to support our vulnerabilities.

“While some progress has been made, significant hurdles remain in accessing climate finance and the pace of implementation does not reflect the urgency of the climate crisis,” Holness said.

He said specific actions need to be taken to hasten the decline of climate change, such as the establishment of a global disaster fund to help states recover and manage disasters; development of innovative risk-informed financing for disaster and climate event; inclusion of vulnerability measures as the prime consideration in determining access to financing, rather than only income criteria; and the scaling up of debt for climate adaption swabs to simultaneously address the climate crisis and the systemic debt issues affecting already burdened developing countries.

Holness, along with his counterpart from Antigua and Barbuda, Gaston Browne were both invited to the two-day summit among 40 world leaders.

The “Leaders’ Summit on Climate” was held to underscore the urgency – and the economic benefits – of stronger climate action.