KINGSTON, Jamaica – Jamaica has been acknowledged for best practices in facilitating a creative ecosystem by the United Nations Educational, Scientific and Cultural Organization (UNESCO) in its ‘Reshaping Policies for Creativity’ global report. 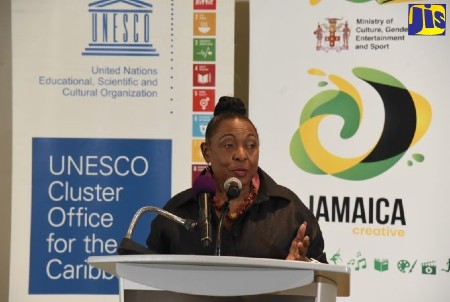 Photo by Michael Sloley for JISAccording to Minister of Culture, Olivia Grange, Jamaica was referenced a total of six times in the 300-page document.

The country was cited for creating permanent bodies to manage dialogue with civil society organizations; creating a youth advisory council within its culture and creative industries; and taking into account the need to improve the working conditions for creatives.

Additionally, the global report credits Jamaica for directly linking support for the cultural and creative sectors to export diversification strategies; strengthening competitiveness in international markets; and being involved in regional dialogue on preferential treatment measures for artistes and culture professionals from the Caribbean region, among others.

“These references demonstrate an awareness of the extensive work that Jamaica, through my Ministry, has undertaken to fulfil its obligation under the 2005 Convention,” the Minister said.

She was speaking at the recent local launch of the report in the Corporate Area.

The 2005 Convention on the Protection and Promotion of the Diversity of Cultural Expressions is a legally binding international agreement that has as its main objectives strengthening the creation, production, distribution, dissemination, access and enjoyment of cultural expressions transmitted by cultural activities, goods and services.

It focuses strongly on developing countries and reaffirms the sovereign right of States to adopt cultural policies that support their own cultural industries.

Countries are required to produce a Quadrennial Periodic Report (QPR)  every four years, which speaks to the state of culture based on the tenets of the Convention and measures taken to protect and promote the diversity of cultural expressions in all their policies.

“We [ratified the Convention] 15 years ago, and for the first time we are providing a (QPR), so that we can be included in this UNESCO document,” said Grange.

She said the six references to Jamaica in the document represent an important moment for the nation, as through this, other countries “will be exposed to what we are doing”.

“It says that we are part of a growing sector as a small island developing State and we recognize what we have to do and are doing it. We are part of those countries that are engaging in best practices and we empower and provide our sector with the capacity-strengthening and the development that they require.”

The launch was part of a series of activities from May 16 to 20, to develop a comprehensive policy and legal framework for the entertainment, culture and creative industries (ECCI) in Jamaica.

Leading the engagement are Ojoma Ochai of Nigeria and Ashley Cork of Jamaica, who were selected by the European Union/UESCO project to strengthen creative industries policy and practice through advocacy, research and skills development.

Jamaica is one of only 12 countries selected for technical support under the EU/UNESCO Expert facility, which acts as an international pool of recognized experts.