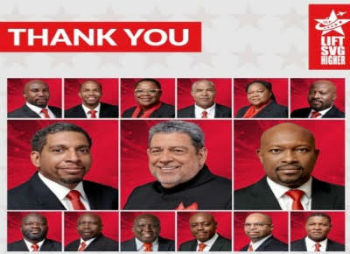 Preliminary figures released here by the Electoral Office showed that the ULP had won nine of the 15 seats in the Parliament, an increase of three seats on the previous one seat majority he had enjoyed in the last two general elections. It is the first time that a political party has won five consecutive general elections here.

Gonsalves, 74, easily won his North Central Windward seat he has been representing since 2001, brushing aside the two other candidates in Chieftain Neptune of the main opposition New Democratic Party (NDP) and Kadmiel McFee of the CVG Green Party.

In a message posted on his Facebook page, Gonsalves thanked voters for returning the ULP to power.

“It’s celebration time. It is five in they tail,” he wrote,” as party supporters gathered here for the celebration.