PORT AU PRINCE, Haiti – Haiti is marking the 12th anniversary of the powerful earthquake that struck the island on January 12, 2010, killing more than 250, 000 people and injuring an estimated 300,000 others, with the national flag being flown at half-mast. 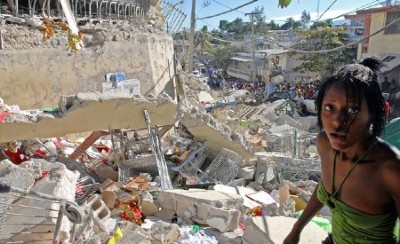 The Haitian government estimates close to 300,000 people lost their lives in the aftermath of the 2010 earthquake. (photo courtesy of UN FAO)Secretary General of the Presidency, Josué Pierre Louis, reminded the country that by decree dated January 6, 2015, January 12 is declared a Day of Commemoration and Reflection dedicated to the memory of the victims of the earthquake that had a magnitude of 7.3 on the Richter scale.

“Consequently, during the day of Wednesday January 12, 2022 marking the twelfth anniversary of this tragedy, the national flag will be half-masted throughout the territory of the Republic; nightclubs and other similar establishments will remain closed.

“Radio and television stations are therefore invited to program occasional broadcasts during the day of January 12,” according to the decree.

In a message, the United Nation said it also remembers “the hundreds of thousands of Haitians who lost their lives and the many thousands more who sustained permanent injuries in the earthquake that twelve years ago devastated the capital of Haiti and surrounding areas.

“We also commemorate the memory of our 102 UN personnel who laid down their lives on that day.”

It said that following one of the darkest days in its history, Haiti has drawn on the resilience of its people, the work of its institutions and the assistance of its many friends and supporters to overcome the ravages caused by that calamity.

“The same sense of resilience and solidarity allowed the Haitians to promptly respond to the dramatic earthquake that hit the southern regions of the country last August,” the UN said.

“Today, we renew our deepest condolences to the families of the victims and our sympathy for all those whose lives continue to be affected by this tragedy. We also renew our commitment to work alongside the Haitian people and with the country’s friends and supporters to help build a sustainable, inclusive, and brighter future for Haiti,” the UN added.