GEORGETOWN, Guyana – Guyana will use an emergency meeting of Caribbean Community (CARICOMP leaders later on Monday to seek continued support from the 15-member regional grouping in its border dispute with Venezuela. 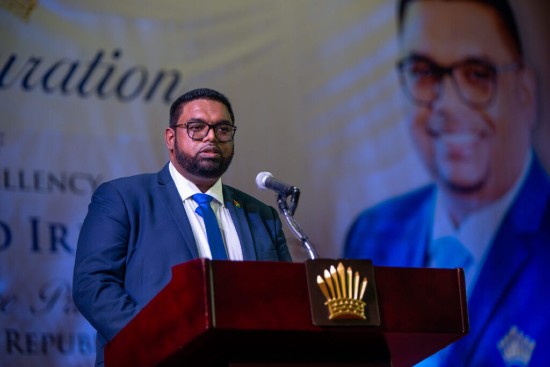 President Irfaan Ali (File Photo)The regional leaders are due to meet virtually at 10.00 am (local time) to discuss the vaccination issue as they continue to implement measures aimed at curbing the spread of the coronavirus (COVID-19) pandemic that has killed thousands of their nationals and infected several others since the first case was detected in the region in March last year.

Guyana’s President Irfaan Ali on Sunday said he would seek CARICOM support in light of the recent decision by the Nicholas Maduro government and opposition parties to reach an agreement unifying their claim to the ownership of a significant portion of Guyana.

Ali told reporters that countries should seek to get Venezuela to participate in the border case now before the International Court of Justice (ICJ) instead of backing a move by Caracas for bilateral negotiations with Georgetown to settle their decades long claim.

“The issue of the controversy that exists in the border has nothing to do with their internal issues and it has already been determined where that issue will be settled and it’s at the ICJ,” Ali added.

Last week, the government said it “firmly rejects” an agreement signed between the Venezuela government and an opposition party in the South American country formally agreeing to unite on the question of the longstanding claim to the ownership of a large swath of Guyana.

Georgetown said that the agreement between the Nicolas Maduro government and the Unity Platform of Venezuela was signed in Mexico City on Monday.

“That agreement is an overt threat to the sovereignty and territorial integrity of Guyana,” the Ministry of Foreign Affairs and International Cooperation said in a statement.

“Guyana cannot be used as an altar of sacrifice for settlement of Venezuela’s internal political differences. While the Government of Guyana welcomes domestic accord within Venezuela, an agreement defying international law and process is not a basis for mediating harmony,” the statement added.

The Norway-brokered deal was reached alongside representatives from The Netherlands, Bolivia, Russia and Turkey.

But President Ali told reporters that he wants those countries to convince Venezuela to participate in the case at the ICJ.

“What we can ask those countries to do is to encourage Venezuela to participate and be active in the ICJ,” he said.

Ali said he would also be making Guyana’s position known at upcoming meetings in Mexico City and a meeting with United Nations Secretary General Antonio Gutteres on the margins of the UN General Assembly later this month.

“This is a controversy. The route in determining it has already been made public. We have embraced that route which is the ICJ and we are committed to that route. That route is the rule of law and that is where the matter resides, not in any side show or any other engagement,” he said.

The ICJ ruled last December that it has jurisdiction to decide Guyana’s claim against Venezuela that the boundary between the two States was fixed in an 1899 Arbitral Award. Venezuela is opposed to the ICJ and its ruling.

Venezuela is maintaining its claim to an estimated 70 per cent of the Essequibo region including Guyana’s offshore oil reserves, with Caracas arguing that the 1899 agreement, which determined the boundaries between the two countries is null and void.

But Guyana has approached the ICJ to seek a final, binding judgement on the 1899 Arbitral Award that determines that boundary between the two countries. In December 2020, the ICJ ruled that it has the authority to rule on this case.

Guyana is however seeking to obtain a final and binding judgement that will clearly state that the Essequibo region is indisputably part of this country.