SAN JOSE, Costa Rica – Guyana has re-affirmed its commitment to an initiative by the Inter-American Institute for Cooperation on Agriculture (IICA) to reduce food insecurity in the Americas. 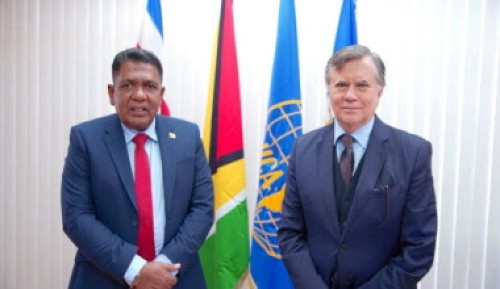 Agriculture Minister Zulfikar Mustapha and IICA Director General, Manuel Otero (DPI Photo)A government statement said that Agriculture Minister Zulfikar Mustapha, made the commitment during an official visit to IICA headquarters, describing the proposal as innovative in bringing countries together, working as a team and collaborating with food security in the region.

Mustapha met with IICA Director General, Manuel Otero, to discuss the country’s action plans, priorities and agricultural challenges, and to advance the dialogue on the main advances of Guyanese agriculture and new opportunities for technical cooperation.

“We in Guyana will support the continental alliance and contribute to the Director General’s vision. We have to work together to achieve food security. The interest they have shown in food security not only in the Caribbean but in the whole world is to be applauded. IICA has been highly proactive in helping the agricultural sector to progress,” Mustapha said.

He described the alliance as an “innovative way of uniting the countries and working together to ensure that we address food security,” which has been aggravated by a current context of overlapping crises, including the COVID-19 pandemic, the conflict in Eastern Europe and climate change.

“In Guyana, we are grateful that our president Dr. Mohamed Irfaan Ali is promoting these same ideas in the CARICOM to ally with countries from all over the world to address the issue,” Mustapha added.

The alliance proposed by IICA for collective action to combat food insecurity, promote sustainability, guarantee peace and democratic stability, has as its roadmap a document with concrete proposals that was also submitted at the Summit of the Americas held last week in the United States.

This medium- and long-term work is based on four strategic aspects: the strengthening and transformation of agri-food systems in the Americas, challenges, and opportunities for agri-food trade in the region in the new geopolitical context, the role of science, technology, and innovation, and facilitating economic and social inclusion by reinforcing the cooperative system.

“This alliance should promote a new generation of public policies that empower family farmers, who are essential, with new extension strategies, giving greater importance to questions of associativism and cooperativism. It also seeks to foster science and technology and increase trade and integration. A new alliance is needed between production and the environment,” said Otero.

“It is necessary to act now to generate an effective coalition to promote food security in our continent, transforming threats into opportunities and generating a set of concrete actions. It is time to come together; no country can get through this crisis alone. Food security must be combated with concrete actions in the short and medium-term,” Otero added.

Mustapha, who is also chair of the Ministerial Work Group established by the CARICOM to analyze the food agenda and the agrifood system in the Caribbean, spoke about the reality of the agriculture sector in his country, a strategic nation with a great capacity to become the food basket of the region.

He explained that Guyana’s priorities are to reduce food import costs by 25 per cent in three years, diversify production and increase resilience to climate change, focusing on corn, soy, and wheat crops; boost intra-regional trade by removing barriers that impact the country; harmonize standards; and foster more science, innovation, and technological development, boosting the institutional framework in these areas.

“We must look for ways to reduce the food import bill by 25% in the next three years; this is a monumental task, and we are going to need investments and a lot of capital, but we have the capacity. We want to diversify our economy, make it more resilient so that small-sized farmers are part of this development that we seek,” said Mustapha.

“We have the land, the water and the capital, we can produce the corn and soy that we need for the Caribbean and for Guyana itself, which can become the center of food production, reduce its import costs and have a resilient productive sector,” he added.

The statement said Otero has since committed to strengthening the National Agricultural Research Extension Institute (NAREI), connecting science with innovation and promoting entrepreneurialism, train young rural people in the use of new technologies for agriculture and act as a bridge in bilateral dialogues and in south-south cooperation actions.