Government Working on Comprehensive Strategy to Deal Decisively With Violence

KINGSTON, Jamaica,  – Amid public outrage over the recent murder of a young woman, Prime Minister Andrew Holness has sought to assure that the government is working to develop further strategies and put in place impactful policies to deal decisively with violence. 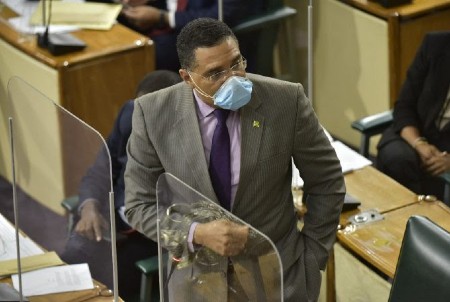 Prime Minister Andrew Holness“The Parliament, myself as Prime Minister, our role is to respond to the outrage of the people and be the voice of the people, and more than that, to take that outrage to fuel new policy and make the changes that people want to see,” he said. “I want to assure the country that that process is ongoing and going fairly well.”

Holness was responding to a statement on tackling violence, made by Minister of Culture, Gender, Entertainment and Sport Olivia Grange, in the House of Representatives, triggered by the murder of 20-year-old accounting clerk, Khanice Jackson.

The Prime Minister lamented that, for many years, society has been ambivalent about violence, and the outrage being displayed by citizens “tells me there is a change happening in the society”.

He stressed, however, that concern needs to be sustained beyond the usual “nine days”.

“Jamaica has to take an instrumental approach to this matter. It can’t be that we come to the House and we just give impassioned speeches. We have to study the problem in Jamaica and put in place the measures to solve it,” Holness said.

In this vein, the Prime Minister informed that the National Commission for Violence Prevention that he empaneled in 2019 has started its work and recently presented its national strategic plan to him, which he has approved.

The Commission, which is chaired by internationally-renowned researcher Professor Maureen Samms-Vaughan, is mandated to conduct a continuing comprehensive review of all existing public and private violence prevention programs as well as the strategies of the Government.

Holness noted that while the Government has been doing work to address all forms of violence across various State agencies, “the challenge is that it is not coordinated, it is probably not funded and it is not led by a national policy”.

The Prime Minister said these are areas the Commission will address.

“I am expecting that within a year, we should be getting a report which will enable the Government to come to the country with a comprehensive strategy, not just a strategy for the Government but for all stakeholders to participate, so we can have a clear road map [of] how, together, the Government, Opposition, the church, all stakeholders can speak with one common voice against violence,” he said.

Holness further contended that while Jamaica still has a far way to go in treating with violence, the passage of the Independent Commission of Investigations (INDECOM) legislation has had an impact on violence.

“Many Jamaicans may not immediately see it, but when we passed the INDECOM legislation, it was a ground-breaking piece of legislation to curb State violence. [It is a] very important piece of legislation, because if we are going to treat with violence and the use of force, then the State must be an example of how it uses force that it is authorized to use,” he said.

Holness said that based on the statistics of police killings, pre-INDECOM and post-INDECOM, it was clear that major changes have been occurring.

“It is not going to be an overnight change, because whilst you have changed the institutions, you have to rely on that institutional change making an impact on culture. So, we still have some ways to go for the average policeman in the street to acknowledge that his authority, though he carries a firearm and he could use it, that that’s his last resort and that his role is there to serve and protect regardless of how people speak terribly to them. That is the professionalism that is needed,” he said.

In her statement, Minister Grange called for collective action across the country in finding solutions to this scourge of violence, especially that which is meted out to women and girls.

“It must be all hands-on deck…. I want to use this opportunity to call on every organization in our country to get involved in activities to stem the bloodletting against our women and girls in our communities. I want to ask our faith-based leadership to use their pulpit and their respected status to sustain a dialogue within communities in the face of this violence against our women and girls. I ask that they engage our men in dialogue as part of our collective effort to deal with these crimes,” she said.

“I beg to see influential men in this society engaging weaker-minded men in conversation, so that we can create communities of harmony and peace where our women and girls can live free from fear for their lives.”

Other members, on both sides of the House, also responded to Minister Grange’s statement, and added their voices to plea for an end to the violence.