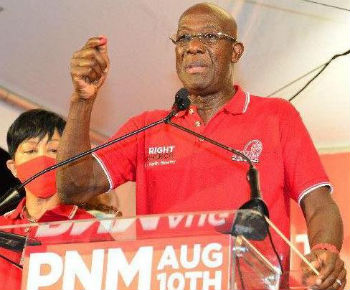 Rowley, right, addresses supporters following his win. At his side is wife Sharon.The PNM won 22 of the 41 seats in T&T’s House of Representatives, defeating the main Opposition United National Congress (UNC), which won 19 seats.

The win marked the PNM’s second consecutive term in office, although it lost one seat. In 2015 the party won 23 seats.

Rowley, in his Aug. 10 election night victory speech, embraced the narrow majority victory, which he said came “against all odds, in the most difficult situation,” including during the coronavirus (COVID-19) pandemic. He promised his government would serve the entire nation, despite sometimes heated political division which surfaced during the campaign.

The UNC finally conceded defeat after initially demanding a recount in five constituencies.

In a statement issued Aug. 18, Opposition Leader Kamla Persad Bissessar noted she was “satisfied that the people have spoken and that Dr. Rowley and his party” would form the next government.

“I congratulate them and wish them the best,” she told supporters. “… I, too, am disappointed with the election and I accept full responsibility for the result.”

The EBC later in the month concluded the recount had been completed and the preliminary results stood.

The losing party also hinted that the absence of international observers had contributed to its defeat and said it would be making its position known on several irregularities “in due course” to T&T’s Elections and Boundaries Commission (EBC).

Rowley said invitations had been sent to the 15-member Caribbean community (CARICOM) grouping to send observers, but that they would have had to arrive in T&T in time to be undergo the 14-day quarantine period due to the coronavirus pandemic. He also said regional and international observers had indicated the venture would be too expensive and that his administration had decided against providing assistance for fear of it being regarded as trying to influence the observers in their duties.

Meanwhile, Caribbean leadership embraced the results of the elections.

“We look forward to growing our already strong relationship with the government and people of Trinidad and Tobago,” said CARICOM Chairman Ralph Gonsalves.