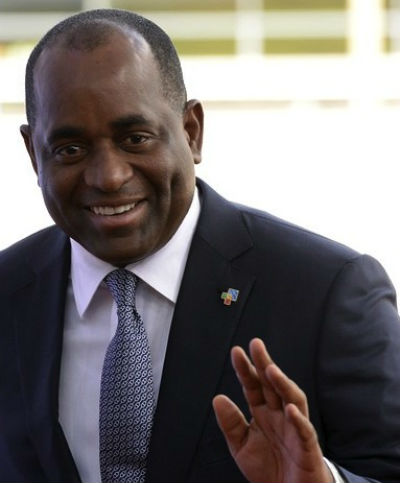 “Skerrit – waves” However, Lennox Linton, leader of the main Opposition United Workers Party (UWP) has hinted at “irregularities” in the polls that saw his party’s seat count in the 21-member Parliament reduced from six to four, according to the preliminary results.

We should never elevate skulduggery to a virtue by congratulating those who succeed by dishonest ways. The 2019 general election in Dominica was not free, it was not fair, it was rigged, it was stolen, plain and simple,” Linton declared in a Facebook page post.

But in a speech after he was sworn into office, Skerrit, 47, extended a hand to Linton, urging him to get together for the benefit of the country even while saying that he believes the “external forces” that sought to derail the general elections did not treat Linton right.

“I have never seen so much external interest in our campaign,” Skerrit said, adding that he is hoping that now that the electorate had spoken they would now channel their interest into rebuilding Dominica.

He reminded Linton that the DLP, which according to the preliminary figures had 17 of the 21 seats, had secured both the seats and the popular votes.

“I think the external people did not deal Mr. Linton right, they used him,” Skerrit said, noting that Linton, instead of focusing on his campaign, was being used “to carry out their plans.”

Skerrit, who led the DLP into a fifth consecutive term, said that he had sympathy for Linton because as a legislator, he has never had to sit in Opposition.

“I do not envy him,” the prime minister said. “I never had the opportunity of being in Opposition, people have told me it is not nice.”