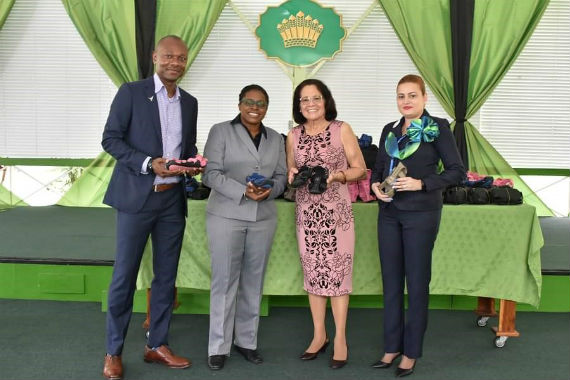 First Lady, Mrs. Sandra Granger (second from right) is joined by Caribbean Airlines, Head of Corporate Communications, Ms. Dionne Ligoure; Sales Executive, Guyana-Suriname, Mr. Dion Inniss and Ticket Office Supervisor, Ms. Stephanie Greene at a brief presentation ceremony to hand over the ‘Shoes that Grows’ which the airline transported at no cost.Through the ‘Kind Soles Project’ Mrs. Granger has donated over 2000 pairs of the expandable shoes to the children of indigenous tribes in Guyana, making it possible for them to walk long distances to school, so they can continue their education.

The “Shoe that Grows” is a sturdy footwear designed to expand several sizes and can last a child up to three years or more. On Tuesday September 17, representatives from the airline handed over several hundred pairs of the special footwear to Her Excellency, donated by the Crown Heights Lions Club of New York USA and other donors from the Diaspora.

Ms. Dionne Ligoure, Caribbean Airlines’ Head of Corporate Communications in commenting on the initiative said: “Caribbean Airlines is grateful for the opportunity to support this worthy initiative by Her Excellency, Mrs Granger and Rethink, which makes a positive difference to the lives of children in Guyana’s hinterland. Many indigenous children in Guyana walk long distances to school, and these shoes are ideal for their journeys. Caribbean Airlines is a long standing partner of the people of Guyana and we are committed to supporting initiatives like these which bring a measure of relief and hope to communities.”

Guyana is an important destination for Caribbean Airlines and the airline operates an average of six daily flights, including non-stop service between New York and Guyana with seamless connections to other Caribbean and North American destinations.

Caribbean Airlines was established on September 27, 2006 and commenced operations on January 01, 2007. It is an authentic Caribbean airline which provides passenger and cargo services. The airline’s professional teams offer a genuine Caribbean experience on all its services and actively demonstrate the warmth of the islands both on and off the aircraft. Caribbean Airlines operates more than 600 weekly flights to 21 destinations in the Caribbean and North and South America. The airline’s fleet is comprised of Boeing 737-800 and ATR72-600 aircraft. Jointly owned by the people of Trinidad & Tobago and Jamaica, headquartered in Trinidad and Tobago, and with an operational base in Jamaica, Caribbean Airlines employs more than 1600 people.

The airline is a member of the International Air Transport Association (IATA) and is recognized as an IATA Operational Safety Audit qualified airline. It is a certified FAA repair station as per regulation 145. For more information on Caribbean Airlines, visit www.caribbean-airlines.com.