BELMOPAN, Belize, – Prime Minister Dean Barrow has formally handed over the leadership of the ruling United Democratic Party (UDP) to Patrick Faber as the political parties intensify their campaigns for the November 11 general elections. 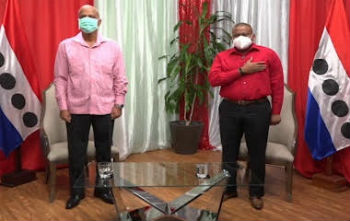 Prime Minister Dean Barrow (left) hands over the reins of party to Education Minister, Patrick Faber“I first off need to say what a tremendous privilege it has been to serve my party as leader over these last twenty plus years,” said Prime Minister Barrow, who led the party to a third consecutive victory in 2015..

“I thank all those with whom I worked and I especially thank the rank and file, the soldiers of our party, the devoted women and men throughout the length and breadth of this country who sacrificed every live-long day for our party, who do all for our party, who would give their very lives for our party,” Barrow said during the virtual ceremony, adding “theirs is the glory and I declare that experiencing their hard work, being a part of their solidarity, their fervent passionate love for the UDP  has been the most uplifting feature of my political life..

“With highest confidence, with surest conviction I cede the mantle of the United Democratic Party leadership to the Honorable Patrick Faber.  The Lion of Collet, the greatest Minister of Education this country has ever seen and the new political champion of all the people of Belize,” barrow said.”

Faber said he is preparing the ruling party “four our fourth term in office” and that he was counting on all supporters, including members of his constituency to “once again to deliver for the United Democratic Party. 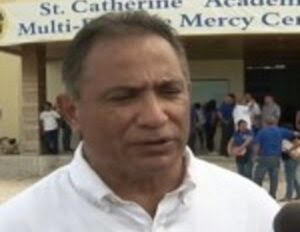 “This election, my friends, is unlike any other in the past, for several reasons but the most obvious is that we are entering into an election in the middle of a global pandemic.  This COVID-19 plague is upon us, not just as a threat to our health and well-being but as perhaps the greatest challenge to our social and economic lives.

“Today, as we celebrate this transition, it is in the shadow of the toll that it has taken on our nation.  Our hearts and prayers go out to the families that are suffering from the illness and especially to those who have lost loved ones to this dreaded disease.  I implore each of you to be each other’s keeper.  Let us all do our part to keep from spreading this deadly virus by wearing our masks, maintaining physical distance and washing our hands,” Faber added.

For its part, the main opposition People’s United Party (PUP) has been unveiling a number of platforms leading up to the general elections.

The party on Friday launched its Public Safety and Justice platform, saying that the level of crime and violence on the streets is a matter of grave concern to it.

It said the policy will involve an increase in the number of law enforcement officials and put mechanisms in place to restore confidence in the police.

PUP and Opposition Leader, John Briceño, said that a PUP government will reform and incentivize police recruiting and training, improve the effectiveness and the prosecution of crime and introduce the citizen’s report card.