PORT OF SPAIN, Trinidad – The United States Embassy here says the decision to raise the Black Lives Matter (BLM) flag on its compound is to call attention to efforts to advance racial equity and access to justice in the United States and worldwide. 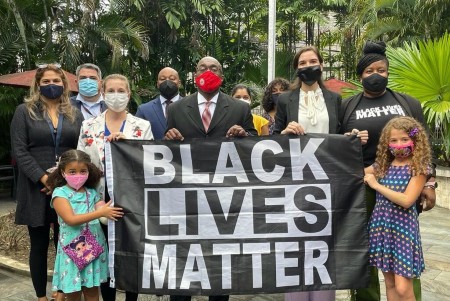 U.S. Embassy in Port of Spain flies Black Lives Matter flag in honor of Black History Month. (Photo courtesy of US Embassy in Trinidad & Tobago)“The United States was founded on the principle that all people are created equal, and it is an ideal we have yet to reach, but continue to strive for to form a more perfect union as articulated in our Constitution,” said U.S. Chargé d’Affaires Shante Moore at the flag raising ceremony on Tuesday.

“This Black History Month, I encourage everyone to take time to reflect how Black history and culture have influenced our lives through music, art, literature, politics, science, business, and sports, and their roles in our strong bilateral relationship between the United States and Trinidad and Tobago,” she added.

The Embassy said that the BLM flag was raised in honor of Black History Month, and to stand in solidarity with Black communities and persons of African descent in the United States and around the world.

It said the flag will fly over the Embassy for the remainder of Black History Month, which is held every February to commemorate and celebrate African American history and the African diaspora.

“While Black History Month originated in the United States, it has received international recognition in countries including Canada, Ireland, and the United Kingdom.  Black history is American history, and we honor the profound impact of African diaspora culture and the immeasurable contributions of Black Americans to the world,” the US Embassy added.

It said that the phrase “Black Lives Matter” seeks to raise awareness of and respond to ongoing racism in the United States and abroad.

“It also draws attention to the need to end systemic racism and inequity experienced by communities of color, and most acutely, people of African descent,” the Embassy said adding that the flags serve as a visible reminder of the collective responsibility to advance social justice issues and the U.S. government’s resolute commitment to confronting the injustices that exist today.