PORT OF SPAIN, Trinidad – Former Police Commissioner Gary Griffith has stated that he is now interested in becoming the Prime Minister of the twin island republic. 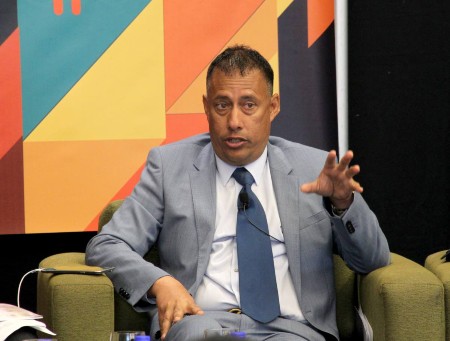 In a statement on Friday, Griffith said that he is no longer interested in the post of Commissioner as the new Police Service Commission (PSC) has changed the criteria for the selection of a new commissioner to now only consider career police officers.

“If this was done to satisfy the political will of (Prime Minister) Keith Rowley and (Minister of National Security) Fitzgerald Hinds, which as everyone knows is to prevent me from reapplying for the post,” said Griffith in a statement sent to media houses and also posted on Facebook.

“Let me say that these efforts were not warranted, since I’ve long moved on and I’m now fully focused on the office Keith Rowley now holds.”

He lamented that the new PSC’s move now ignored the many achievements under his tenure, and debarred highly qualified and capable individuals like him from leading the police.

The criteria are now more specific with regard to policing experience, training and the nature of master’s degrees candidates must have.

According to Griffith the shift neglected international precedents.

“Jamaica has a member of their Defense Force heading their police. New York City doesn’t not even allow serving members of their police department to be Commissioners, in order to avoid issues of collusion and corruption born out of familiarity.

“But the most egregious aspect of this new move by the PSC, however, is that it ignores the will of the people who saw what someone from outside the service could do in reducing crime by record numbers, and who made them feel safe and secure from the tyranny that they now face daily from the criminals in our midst.”

While he was proud of his results as CoP and has moved on, he lamented the PSC’s move will now reduce the pool of possible applicants for the post and exclude many capable individuals.

Griffith added that the PSC’s action exposed alleged flaws in the Constitution which gives the Prime Minister too much power, such as appointing the President who in turn appoints service commissions like the PSC, which Griffith alleged were all beholden to the PM.

“Having now seen and experienced this with three consecutive PSCs, firstly the (opposition) United National Congress  (UNC) appointed-PSC moving me to fourth on the merit list despite me topping all eight assessments for a total of 89.14 per cent, the Bliss Seepersad PSC illegally withdrawing another merit list I topped, and now this new PSC making policy that aligns with the desires of Rowley, I can say that constitutional change is badly needed.

“This is why as I focus on my future service to Trinidad and Tobago, I want to assure that any government that I will be a part of will be one of inclusion, empowering citizens and transforming the country in ways never before seen.”