NASSAU, Bahamas – The Bahamas government has warned local companies to be very cautious when conducting business with any Russian entity even as the main opposition Free National Movement (FNM) called on the government to act more decisively in the interest of sovereignty. 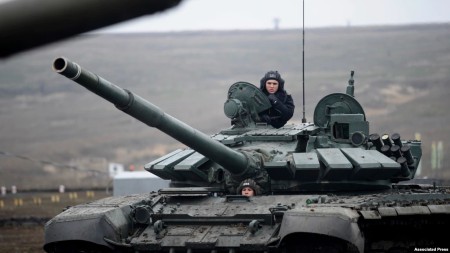 Russian troops take part in drills near the country's border with Ukraine, Dec. 14, 2021. (Photo courtesy of AP)A statement from the Cabinet Office said the issue of sanctions against Russia following its invasion of Ukraine had been discussed on Tuesday and “we are in consultations with all our partners and stakeholders, both domestic and international. This remains an evolving matter.

“In the meantime, we are advising all entities within The Bahamas that they ought to deal with appropriate caution in respect of any transactions in our country with Russian individuals and entities who have been sanctioned by the United States, EU, Canada and the United Kingdom,| the statement said, adding “we continue to deplore the attack on Ukraine by the Russian Federation”.

The US Embassy in Nassau has urged The Bahamas to limit Russia’s access to the Bahamian financial system and to restrict this country’s airspace to Russian aircraft.

Caribbean Community (CARICOM) leaders including Prime Minister Phillip Davis had agreed at their Inter-Sessional Summit in Belize last week to leave the possible imposition of sanctions on Russia to individual member states.

“We discussed the issue of Russia at length. CARICOM felt that that is something we should do as individual countries. We have to decide what kind of sanctions, if any, we can take as countries and not as CARICOM,” said CARICOM chairman and Belize Prime Minister John Briceno.

But FNM leader, Michael Pintard said he is concerned that Russian vessels denied permission to enter the United States and Canada have gained entry into the country.

He said reports that Russian tankers have been allowed to enter the country are troubling.

“This story is especially troubling due to its assertion that the Russian state-owned Sovcomflot vessels were not permitted to land in the United States or Canada, two of our most influential strategic western allies along with the United Kingdom, but were allowed to do so in The Bahamas,” he said in a statement.

“As responsible members of the international community, The Bahamas must act in concert with its strategic allies and multilateral partners toward rejecting Russia’s illegal and inhumane invasion of the sovereign state of Ukraine. As I indicated recently, we need to stand in solidarity with the people of Ukraine whose territory has been violated and millions of its citizens displaced, and many others dying daily because of Russia’s hostility.

“We call upon the Bahamian government to act more decisively in the interest of sovereignty, humanity and the maintenance of international laws and norms. Despite the associated risks—as a people—we must be found to be standing on the side of principle and legality, and in the interests of humanity.”

Pintard said as such, the opposition calls upon the government to elucidate its policy relative to Russia “so that the Bahamian people and the international community might know where we stand”.