Teachers Challenging 10 Per Cent Salary Cut By Government of Belize

BELMOPAN, Belize – The Belize National Teachers Union (BTNU) has gone to court challenging the government decision to reduce the salaries of its members by 10 per cent. 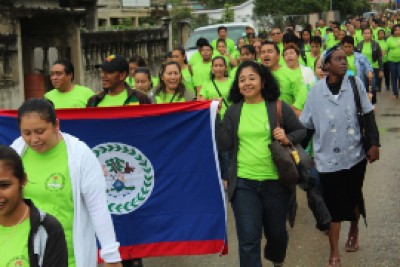 The union is claiming that the government has no legal authority to intervene in the private agreement made between a teacher and the managing authority, namely the Catholic Schools.

“Essentially what we are saying in the claim is that this matter relates…to the 10 per cent reduction in the salary for teachers. And what we are arguing is that matter wrongly includes teachers who work for denominational schools, or teachers who do not work for the government of Belize,” said BNTU attorney, Darrell Bradley.

“Essentially we are saying that the government has no lawful authority to institute a wage reduction for teachers who are not their employees. So that in Belize we have a church state system, and there are two regimes.”

“And essentially, we are saying that those persons, their employers are these denominations, and these denominations have a written contract which is a fixed term contract with these teachers. And so the government of Belize has no lawful authority to intervene in the private employment relationship between a teacher and a managing authority.

“In addition, they have no lawful authority to direct the terms of a written fixed contract. So, the lay claimant is Mario Rodriquez and he is the vice-principal of St Ignatius School in Belize City and he has a written five-year contract with the Catholic management.”

Bradley said that there is nowhere or no lawful authority that there could be a reduction on his wages, provided of course that he “shows up for work and discharges his functions as vice principal.

“A unilateral reduction in wages cannot occur in those circumstances,” Bradley added.

Public servants and teachers have been at loggerheads with the John Briceno government that announced plans to cut public officers’ salaries and increments, as well as other cuts to government purchasing during its first budget presentation in April.

The government has also announced plans to freeze increments and slashing salaries by 10 per cent for three years.

The teachers and public servants have since returned to their jobs, with the unions indicating that the docking of wages, as well as the 10 per cent salary cut may have deflated the momentum of the indefinite strike.

The government has maintained that the salary adjustment was a difficult, but necessary decision that it had to make, adding that “no new administration would want to come in and say let’s talk about cutting salaries; it doesn’t make any political sense”.