KINGSTOWN, St. Vincent – Prime Minister Dr. Ralph Gonsalves left here on Wednesday for an official visit to Taiwan urging China to desist from conducting military exercises near the Asian country that it regards as a renegade province. 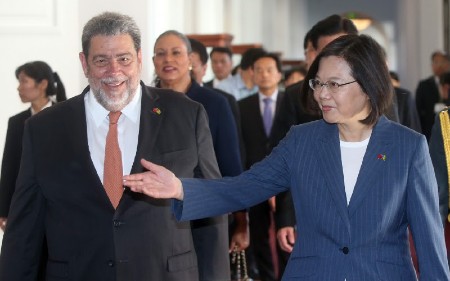 Prime Minister Dr. Ralph Gonsalves with President of Taiwan Tsai Ing-wen (CNA Photo)“I want to say that the government of St. Vincent and Grenadines (SVG) is calling upon the People’s Republic of China, to desist from the military exercises, designed to threaten or intimidate the people of Taiwan,” said Gonsalves, who will be on a one week visit to Taiwan, after spending two days in New York.

St. Vincent and the Grenadines is among a handful of CARICOM countries that have established diplomatic relations with Taiwan despite China’s call for countries to recognize its One China policy.

China has announced military exercises near Taiwan following Tuesday’s visit to Taipei by Speaker of the U.S. House of Representatives, Nancy Pelosi amid opposition from Beijing.

While many Taiwanese welcomed the visit, a small group of protesters, including those who support unification with China, stomped on American flags and held up signs disparaging Pelosi and urging the U.S. delegation to go home, the Washington Post reported.

Gonsalves, speaking on the state-owned NBC Radio, from Argyle International Airport, as he prepared to depart the island, said that SVG, which has had diplomatic relations with Taiwan since 1981, believes in the peaceful settlement of disputes.

“There has been a dispute since 1949, between mainland China and Taiwan. Both peoples of Taiwan and of Mainland China are part of the Chinese civilization,” Gonsalves said.

“And whatever the challenge, the contradictions, the difficulties, the problems between those two peoples in those two territories of the same civilization, it is for them to sort out their problems peacefully.”

China claims Taiwan, a self-ruled island of 23 million people, as a part of its territory and has pledged to use military force if Taipei declares independence.

Prime Minister Gonsalves said Beijing’s response to Pelosi’s visit was “surely excessive”, adding, “… all this saber-rattling, it does nothing for world peace.

Gonsalves, 76, the longest serving head of government in the region, said China’s actions “exacerbates the problem … and the spillover effect on the rest of the world, given all the turmoil already in the world, in the global political system, in the global economy, exacerbated already by the war in Ukraine and now worsening tensions across the Taiwan Strait”.

Gonsalves said that such military aggression affects people not just directly within the Chinese civilization but also countries as far away as SVG.

He is promising to write to the Chinese government “to desist from this saber-rattling and to desist from conduct, which, by any reasonable reflection, would be intimidatory and a threat to the people of Taiwan and to peace and security across the Taiwan Strait and in East Asia and the world.

“Let us settle our disputes peacefully and it is better to be talking and talking than warring and warring. So that is my plea this morning.”

Gonsalves said that in Taiwan his delegation will meet the President Tsai Ing-wen and other high-level officials.

“This is my 11th visit to Taiwan, my tenth as prime minister. I am not going to allow any tensions there to prevent the visit, or to hold me back from visiting a friend and ally because of the action of the People’s Republic of China.

“We have important business to transact with the Republic of China on Taiwan and that’s what I’m going there for. And I am hopeful that the Mainland Chinese would respect what I’m saying.”

Prime Minister Gonsalves said people had asked him if he was not afraid to travel to Taiwan at this time “with the mainland Chinese threatening and intimidating and the like.

“I said, ‘No, because we can’t have this kind of a conduct in international relations. Even if persons said there was no necessity or desirability for Nancy Pelosi to go there now, the point is this if even if you were to say that, this reaction is completely overboard by the mainland Chinese. That’s our view.

“‘And surely the Speaker of the House of Representatives could go and visit where she wants to go and visit once the place you’re going to welcome them. We have to stop fighting these old battles in this irrational kind of a way.”

He said that Kingstown and Beijing worked well in several regional and international organizations and at the United Nations, including at the Security Council, when SVG was a non-permanent member for the 2020-2022 term, the Caribbean Development Bank, Community of States of Latin America and the Caribbean, and CARICOM where Belize, Haiti, St. Kitts, St. Lucia, and SVG — recognize Taiwan as a country independent of China.

“If they drop that condition, well, then we will have formal diplomatic relations. But you can’t tell me to abandon a friend in order to come and have diplomatic relations with you. That’s entirely unacceptable. We wouldn’t accept it from the United States or Britain or anybody else for that matter. And we’d defend self-determination of peoples and their sovereignty and their independence.”

Gonsalves said that in the way that he opposes the United States “in any actions which there have been” against Cuba, Venezuela, Nicaragua, he is calling “for dialogue and peace, without precondition” between Beijing and Taipei.

“I’m saying the same thing to the mainland Chinese: have dialogue without precondition with your neighbor, the people of the same civilization, the same Chinese civilization, who reside in Taiwan and have made that place, that locale, that country their home.

“And to be threatening this way, looks bad for mainland China. It looks and it is clearly excessive in all the circumstances and subversive of regional peace in that area and world peace, generally.

“I am going to see our friends in Taiwan and we will further strengthen our relations. And in those regional or international organizations in which we are members and mainland China are members, we will work together on the matters upon which we agree and we will agree to disagree on those things which we cannot agree. But we will have respectful, intelligent conversations.”

Gonsalves said he wanted the people of Taiwan to know that St. Vincent and the Grenadines continues “to be in solidarity with them and for the peaceful settlement or any disputes between themselves and the brothers and sisters across the Taiwan Strait on mainland China”.

He said his island supports “the one Chinese civilization policy, not a one China policy, because from the one civilized nation, you can have different legitimate political expressions. And you do have them, for example, on mainland China and Taiwan.

“That’s our position, very simple, it’s straightforward and logical. And to the extent we can be helpful in any way, we will continue to be that way without any confrontation with anybody,” he said, adding “it’s unworthy of a great civilization’

Gonsalves said he has been speaking about  “these ancient battles” inside of St. Vincent, the region, and globally, “where people have nuclear weapons and every other artillery of a non-conventional kind”.

Gonsalves said that the 23 million people in Taiwan are “building their own society as a first world country.

“They came virtually from nowhere. They have a thriving democracy. Like all societies they have all kinds of contradictions and challenges but they’re doing quite well. And the people’s views are represented in the government and they have their form of government, it’s a participatory democracy.”

He asked listeners to consider how frightening it must be for ordinary people going about their daily lives in Taiwan.

“ … let’s face it, you don’t think they will resolve this problem, they have resolved so many over their years –5000 plus years. This will be seen as a blip in the whole historical process. And we have to cut out all the big power vanities and the like and just be reasonable and talk.”

“The Americans may agree with me about what I am saying now about Taiwan and the Chinese mainland Chinese would agree with me — what I talked about the Americans in relation to Cuba, Venezuela and Nicaragua. Well, I must be right on both counts,” Gonsalves said.