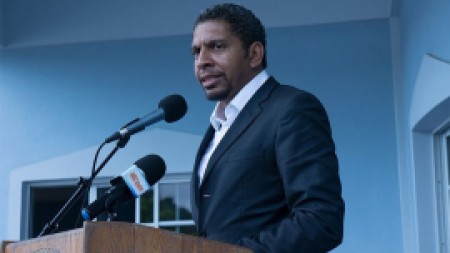 Finance Minister Camillo GonsalvesThe excise tax on fuel will be halved from that date.

He told the joint press briefing with Prime Minister Ralph Gonsalves, Minister of Agriculture Saboto Caesar and Minster of National Mobilization Orando Brewster, that as of March, the average cost of diesel at the pump in the Eastern Caribbean Currency Union (ECCU) was EC$15.76 (US$1 = EC$0.35) a gallon.

Gasoline was averaging EC$14.83, whereas in Barbados, which is outside the ECCU, consumers were paying EC$21.10 a gallon. The Finance Minister said that SVG has the lowest gasoline price in the Eastern Caribbean — EC$14.69 — and the diesel price — EC$13.20 — was only lower in Anguilla.

“So, already as prices increase, we have the cheapest gas and among the cheapest diesel, not because we subsidize it but because those countries put more tax on it,” Gonsalves explained.

He said that once gas passes EC$15 per gallon, it starts to feel very expensive and people feel it more in real and psychological terms, even though in 2008 that figure reached EC$16.

The Finance Minister said government has decided to look at the excise duty on fuel, which is about EC$2.10 of every gallon of diesel and EC$3 for diesel.

“We are trying to hold the line against the increases by reducing this excise tax by 50 percent,” the finance minister said, adding that taxes account for about 18.75 percent of gas prices at the pump.

Meanwhile, Prime Minister Gonsalves said that if the government had already increased the price of fuel in keeping with the rolling average, gasoline would have gone past EC$15 a gallon about 10 days ago.

He said consumers would be paying an additional EC$1.38 more on gasoline and EC$0.88 more on diesel.

However, since the government was working out the revision announced on Thursday, it decided to “eat the cost,” the Prime Minister said.

Meantime, the Finance Minister also announced that for the next three months, the customs service charge on cooking gas will be removed, since that product does not attract excise tax. As a result, he said, the savings will not be as significant as on gas and diesel.

The Finance Minister said the government will also waive the customs service charge on all fuel bought by VINLEC — the state-owned and sole commercial generator of electricity.

This, he said, would result in a reduction in the fuel surcharge that is passed on to the customers.

He said that this will be reviewed after three months, during which time the government is expected to lose EC$500,000.

When the revenue that is lost at the pump is factored in, the government is expected to lose about EC$934,000 monthly or just under EC$3 million during the three-month period.

“This is a multimillion-dollar package of savings and we are hoping we don’t have to extend it much beyond the next three months,” he said.