CASTRIES, St. Lucia,– Prime Minister Allen Chastanet has presented an EC$1.12 billion (One EC dollar=US#0.37 cents) budget to Parliament saying it is the best estimate for both revenue and cost; with the understanding that if the coronavirus (COVID-19)  continues it will impact revenue negatively and increase cost. 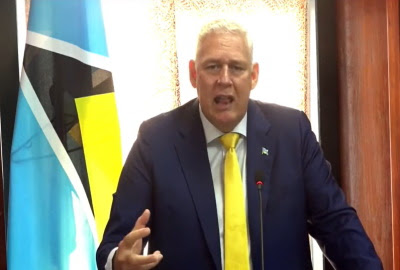 Prime Minister Allen Chastanet delivering budget speech (CMC Photo)Chastanet, whose ruling United Workers Party (UWP) is gearing for a general election later this year, said that the fiscal package, which contains “no new taxes,” represents a 21.3 per cent increase over the revised estimate for the last fiscal year.

In a lengthy budget speech, Chastanet said that the projected increase in revenue for 2021-22 relative the outturn in 2020/21 is consistent with expectations for a gradual but steady recovery of the domestic economy.

He told legislators that the recovery will be driven by a confluence of factors, with the tourism sector playing a significant role “as a direct consequence of increased vaccination rates, opening of key source markets and rollback of some travel restrictions.

Chastanet said that the estimates of expenditure is set at EC$1.639 billion, representing an increase of 6.8 percent increase over the projected outturn for fiscal year, 2020-21. He added that recurrent expenditure is estimated atEC$1.360 billion or 83 per cent of total expenditure.

Capital expenditure is estimated at EC$278.6 million or 17 per cent of total expenditure. Notably, the allocation to meet the debt principal repayments in this fiscal year is set at EC$125.8 million, Chastanet said, adding that “as part of our fiscal strategy two expenditure lines, namely salaries and debt service payments have been identified as top priority”.

He said non-tax revenue will amount to EC$92.69 million while grants amounting to EC $121.26 million will come from friendly governments and multilateral institutions.

Chastanet said that the government intends to receive EC$6.04 million in capital revenue from the proceeds of the sale of assets, while government Instruments, including Bonds and Treasury Bills will account for EC$240.86 million, representing a reduction of 9.8 per cent or approximately EC$26.26 million compared to the approved estimates for 2020-21.

He said other loans totaling EC$268.72 million will come from various regional and international financial institutions.

Chastanet told legislators that on the basis of the projected numbers for revenue and total expenditure, both being affected by the “there is a current deficit of EC$232,491,500 and an overall financing gap and deficit of EC$383 million.

“Given this fiscal balance, a policy stance of fiscal consolidation over the medium to long-term is needed to reverse and stop any further deterioration and thereafter to start the process of rebuilding and strengthening our fiscal position.”

Chastanet said that in light of this significant overall deficit “we must proceed judiciously and in a fiscally-prudent and responsible manner,” adding that “this will require that we work together in our country’s interest in a spirit of shared sacrifice to improve our revenue performance.

“For this reason…there are not many of the usual tax breaks in this budget that some have grown to expect. I wish to remind this honourable House that these tax-related relief measures to targeted groups of households and businesses are being provided under the framework of the Economic Recovery and Resilience Plan (ERRP) and are ongoing in most cases.”

Chastamet said that it is also worth noting that there are “no new taxes” in this budget, given that the general orientation of this government with respect to taxation is to lower taxes wherever possible so as not to increase the tax burden on our citizens.”

Prime Minister Chastanet said that despite the COVID-19 induced revenue challenges, his administration would be implementing policies aimed at assisting the general population and new measures to support the economy and help smooth out consumption of families as well as to increase revenue collection.

* Mr. Speaker, the period during which frontline workers are able to import vehicles duty free has been extended until September of fiscal year 2021-22.  Also, Mr. Speaker, to make the process more manageable for taxpayers, especially given the current COVID-19 related challenges in obtaining relevant documents, the deadline by which individuals and individual enterprises are required to file their personal income tax returns has been extended until May 31, 2021.”

Chastamet said that corporations can engage the Tax Authorities directly where there is a need for extension for filing their corporate income tax returns, as these will be dealt with separately.

“Importantly, Mr. Speaker, during the new fiscal year efforts will also be directed at improving tax administration through recovery efforts to boost revenue collection,” the Finance Minister said, adding that regarding property tax, it is “yet another regime which has been identified by this administration for reform.

“It has long been recognized that this tax regime has typically under-performed and is fraught with a number of issues as was found in a 2015 study by the Caribbean Regional Technical Assistance Center (CARTAC) which identified a number of deficiencies with the current system.

In addition, Chastanet said that the expectation of persons who have paid property tax is that it is commensurate with the provision of a list of services that impact their quality of living or enhance their experiences in a given community.

“Given all these concerns, the government intends to introduce a revised ‘property tax’ system which addresses the concerns and deficiencies cited in the 2015 CARTAC study. The objective of this reform is to establish a property tax regime that is simple, fairer in terms of its incidence and takes greater account of the variations in properties within a particular region.”

The Finance Minister said that the official stock of public debt increased by 10.4 per cent to EC$3.773 billion by the end of 2020.

He said although the year-on-year increase in the debt stock in 2020 when compared to 2019 is higher, this outcome, must be placed in its proper context as an “outlier” given that before the onslaught of the pandemic, the public debt stock grew by an average of 3.3 per cent during the period 2016 to 2019, compared to the period 2012 to 2015, when the public debt grew at an average rate of 6.3 per cent.

Chastanet said the pandemic-induced contraction in economic activity in conjunction with disbursements from rapidly negotiated and secured concessionary debt from regional and international financial institutions, such as the International Monetary Fund (IMF) World Bank, Eastern Caribbean Central bank and the Caribbean Development Bank, resulted in an increase in the debt-to-GDP ratio estimated at 86.5 per cent at the end of 2020.

Chastanet said that it is important to note that the increase in the island’s debt-to-GDP ratio is similar to what occurred in the Eastern Caribbean Currency Union (ECCU).

“However, I wish to assure St. Lucians that, like other ECCU and regional countries, following St. Lucia’s temporary deviation from the prudential path of fiscal sustainability in 2020, the debt to GDP ratio is expected to be on a downward trajectory as the domestic economy recovers and returns to positive growth rates.

“Additionally, the government will adjust its fiscal policy stance and embark on a path of fiscal consolidation in the medium term. Mr. Speaker, these would slow down debt accumulation and allow for St. Lucia to converge to the revised ECCU’s regional debt target of 60 per cent by 2035. Mr. Speaker, this revision by the Monetary Council in February 2021 to extend the date from 2030 to 2035 for the attainment of the debt target was driven by the pandemic,” Chastamet said.