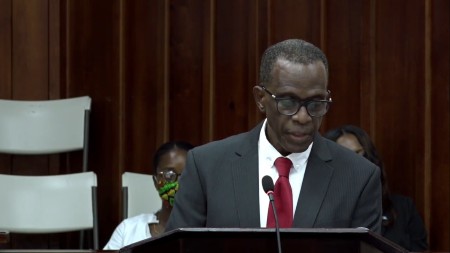 But he told legislators on Tuesday night that having reviewed the fiscal situation and the likelihood of higher interest rates occasioned by changes in the global economic environment brought about by the Ukraine War, government has decided to defer the full implementation of this waiver of Income Tax.

“As an incremental step towards fulfilling this promise, my government has decided that effective January 1st, 2023, persons earning up to EC$2,083 monthly will pay no income tax,” Pierre said, adding that this would include certain categories of public servants.

He said that this initiative would result in an additional 15,000 people in the public and private sectors no longer paying income tax, adding |this measure should provide some relief to these workers battling to cope with higher food prices and the general increase in the cost of living.

Pierre said effective January 1st, next year, the annual personal income tax allowance will increase from EC$18,000 to EC$25,000 and that deductible allowances, which include home mortgage interest, insurance and others will now be capped at a maximum of EC$30,000.

The Finance Minister told legislators that there would now be three personal income tax bands instead of four and that the effect of this change will result in two-thirds of taxpayers being better off, bringing the average effective income tax rate down from 5.4 to 3.7 percent.

Pierre said that the government is yet to fully honor its commitment to settle tax refunds of up to EC$5,000 even as his administration from November 2021 has instructed the Inland Revenue Department to refund all taxpayers owed less than EC$500.

“This exercise is ongoing. For the period November 2021 to March 2022 an amount of EC$3.8 million in tax refunds was paid to 1,959 taxpayers,” he said, adding that the majority of the taxpayers received refunds in excess of EC$1,000.

Prime Minister Pierre said that the government is examining a tax amnesty, noting that “sitting on the government’s books at the Inland Revenue is EC$1.2 billion in outstanding taxes and interest and penalty charges”.

He said that for income tax years up to 2020, Corporate income tax, personal income tax, and property tax if paid by May 1 next year will be exempted from all related interest and penalty charges.

“All income tax liabilities and related interest and penalty charges due before the income tax year 2000 will be written off. Disputes relating to tax liabilities, which have delayed the payment of taxes, will be subject to review by a dedicated committee to speed up the process of settlement so that taxes can be paid earlier rather than later.”

But Pierre said that the waiver of penalties and interest charges will not apply to hotel occupancy taxes, value added tax, withholding tax; and taxes deducted from employees by employers.

In his budget presentation, Pierre said that his administration intends to overhaul the tax system to ensure greater efficiency in the collection of taxes, to secure a higher level of tax compliance, and to broaden the tax base.

He said an overhauling of the tax system will require a greater reliance on indirect tax rather than direct tax and in this process, the existing tourism and fiscal incentive regimes will be reviewed to ensure they are fit for purpose.

He said to ensure that St. Lucia is compliant with international regulations as they relate to international taxation, and to attract the right types of investment, the government will undertake a comprehensive revision of its tax policies and legislation.

“St. Lucia continues to make strides in meeting international tax transparency standards. To this end, we have made legislative amendments since assuming office, to enhance our monitoring capabilities in relation to the Foreign Account Tax Compliance Act (FATCA); the Automatic Exchange of

Pierre said however, it should be noted that compliance is an ongoing process with several facets and as such, continuous adjustments are required.

He told legislators that the Organization for Economic Co-operation and Development (OECD) is currently deliberating on implementing a global minimum tax, as well as establishing standards for what they consider the fair distribution of taxing rights on the profits of large multinational companies.

“Mr. Speaker, you may be aware of the increased scrutiny of Citizenship by Investment programs, whereby countries and international institutions have called for the repeal of these programs. As such, there may be a need to review our own program to ensure that it meets all the standards for international tax transparency.”

Pierre said St. Lucia has received an “On Track” rating from the OECD for the automatic exchange of information in 2021, which is a favorable rating and one which signals the island’s firm commitment to compliance with international tax standards.

He said the European Union (EU) continues its assessment of jurisdictions to promote fair taxation worldwide and address what it deems to be harmful tax practices.

“As such, it publishes a list of non-cooperative tax jurisdictions, twice a year. Saint Lucia is presently in good standing with the EU, and not on the EU’s black list. Mr. Speaker, we continue to work diligently to maintain our current ratings with both the EU and the OECD, while attracting foreign direct investment and fueling sustainable economic growth,” Pierre said.

He acknowledged that there is still some work to be done to ensure that St. Lucia continues to be competitive as an International Financial Services Centre.

As a result, the government has embarked upon targeted consultation with the private sector, to explore a more broad-based sectoral reform, all aimed at ensuring that the island remains an attractive domicile for all investors.

In his budget presentation, Prime Minister Pierre said that debt had become “an inescapable reality if we are to finance the capital investments necessary to expand the economy”.

He said while the coronavirus (COVID-19) pandemic provided access to concessionary loans, the current disruption in the global economic environment brought about by the Ukraine war will result in higher interest rates making borrowing more expensive.

“The preferred route to bringing public debt under control is to generate surpluses on the primary account. In the current circumstances, this is not likely and therefore my government’s immediate debt policy strategy is to reduce its dependence on short term high-interest borrowing, through the use of treasury bills, and to pursue long term financing with lower interest rates from multilateral agencies, financial institutions, and friendly governments.”

Pierre said that the current treasury bills portfolio is in excess of EC$420 million thereby limiting the use of this instrument as a cash management tool for which it is intended.

“Mr. Speaker conversion of these short-term instruments is in keeping with the government’s Medium Term Debt Management Strategy (MTDS) to lengthen the maturity profile, reduce rollover risk, and reduce the cost of borrowing by seeking lower interest rates.”

Pierre said to assist the government in returning to prudential levels of borrowing, it intends to enact the Public Debt Management Bill that will enable the authorities to manage and consolidate all laws pertaining to debt and to do so with a high level of transparency and accountability.

“It will also reduce ambiguities and inconsistencies that may have existed in the various pieces of legislation,” Pierre told legislators.

Debate on the budget presentation is due to start on Wednesday.